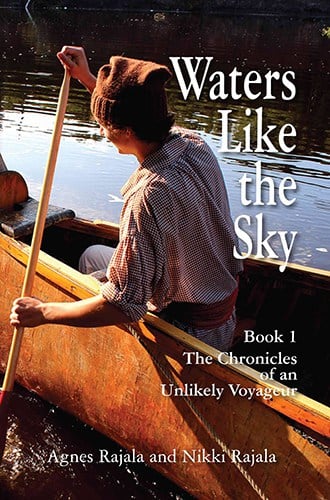 Will André be able to reach Denis before the evil one the natives call the windigo finds him first?

Steeped in the history of the French-Canadian voyageur journeys in the early 1800s in North America, Waters Like the Sky is a story of a well-educated teen boy who despises his fancy schooling and longs for a more adventurous life. André’s fate changes when a letter with a royal seal arrives. He discovers he has French noble blood. He is part of a family in France, has a brother he’s never met, and an enemy who wants him dead. Determined to locate his brother and set things right, André sets out to search for Denis in the only way open to him―becoming a voyageur. Unaccustomed to the hard voyageur life, André uses his only advantage―his education. He fights to earn the respect of his fellow voyageurs and gains many life lessons on his quest to track down his brother. Will he be able to reach Denis before the evil one the natives call the windigo finds him first?

Closing the heavy door of Father Goiffon’s house behind him, André squared his shoulders, prepared to set off toward his home. The familiar quiver of nervousness sent a chill down his back as he peered through the gathering dusk at the path ahead.

That meant that his usual tormentors–Michel, Pierre, Claude, and the others–would be in their homes, perhaps eating their suppers. They would not be outdoors, to greet him with jeers and taunts.

He cringed as he thought of their sneers.”Bon-à-rien”–their name for him meant ”good for nothing.” It was their way of reminding him that, while they were helping their parents with the many chores of wresting a living from their small farms, André was still in school.

But it’s not my fault! André wanted to tell them. My father won’t let me quit school, as you have done. I have asked and asked him to let me stop these lessons, but he won’t. And what good will they ever do me? When will I ever use mathematics, or Latin, or fancy words?

Thinking of his troubles, he strode heedlessly, his feet crunching through the icy crust that the evening coolness had formed over the melted slush from the day’s warmth.

I’ll ask again tonight, he decided. I’ll tell him he needs me. I could–

A slushy wet snowball whizzed, just inches from André’s head, and struck the tree by the path. He had been so deep in thought he had forgotten to watch for trouble, and here it was. At the woodpile in Michel’s yard, two of his former schoolmates stood laughing: Michel and Claude. André’s heart plummeted. Claude was bold, and together with Michel, there was no telling what they might do.

I won’t run. I won’t let them make me run. André clenched his teeth and walked straight ahead, not looking around. If only he could get past their yard before something worse happened.

“Oh, look, it’s Bon-à-rien! How prettily you walk, Bon-à-rien! Did you learn some new dance steps today? Tra-la-la!” And Michel trilled a silly tune, whirling about with a hand on his hip and the other held over his head.

André made a mask of his face and lengthened his stride. How had they learned about that?

“Are you thirsty, Bon-à-rien, after all that hard work copying verses? Such a nice script you write. Oh, poor Bon-à-rien! Here, have some ice water!”

This time the mushy snowball splashed against his neck. Driblets of ice and water ran down his back, while the dirty snow slid down his coat, leaving a muddy smear. André ground his teeth at the jeering laughs when it found its mark. He would not brush it off.

They had come out of the yard, now, and were waiting at the path just ahead.

”Here, have some more,” and Claude squashed a handful of muddy slush against André’s face.

Michel yanked off his cap. “You mustn’t cover up that fiery hair!” he cried, and tossed it into the ice-rimmed puddle.

André turned, his arm drawn back to hit–but Michel grabbed it, winding his foot around André’s leg and pushing. André fell headlong into the dirt and slush of the path. In a trice Claude was on his back, pummeling him and holding his face into the dirt and muck. André opened his mouth to yell, and had it filled with wet snow.

The two boys rolled together in the icy mud, flailing and clawing at one another, while Michel stood ready, with his hands full of snow. André dug his fingernails into Claude’s neck, and he felt Claude’s fist smash against his cheek. He pounded Claude’s face with his other fist while Claude grabbed his hair and banged his head into the puddle.

At that moment the door of the cottage opened, sending out an oblong of yellow light, and a man’s voice shouted, “Michel! What are you about? Get in here with that wood!”

Without a word, Michel turned and went back to the woodpile. Claude got to his feet and slouched off toward his own home.

Shaking, André stumbled to his feet. With fumbling hands he brushed off what snow and mud he could, and continued on his way home, not stopping to try to find his cap. His breath came in big sobs.

That does it, he thought. After this, Papa will have to let me quit these special lessons with the priest. Why do I need them, anyway? I could already read and write. That’s more than my Papa Joseph or Mama Berthe ever learned to do. I write long sentences, very neatly. I read Father Goiffon’s books hardly missing a word. And I can multiply and divide big numbers. What for? I should be done with this special schooling. There is no need for the lessons.

And he was ashamed to keep on at lessons when his parents could use his help. Like the other boys.

But–he had to admit: some lessons were exciting. The history, now–his blood raced at the tales of brave explorers such as Champlain who went into unknown dangers and intrepid captains like LeMoine who captured a British fleet with his one small ship. Arithmetic was fun, too, like solving puzzles. 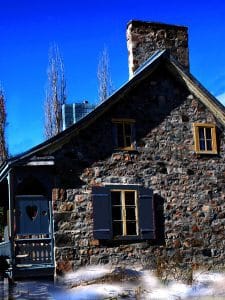 And fencing–ah, that was truly a delight. He thought of Father Goiffon, with his priest’s black cassock tucked up, shouting “En garde!” and thrusting with the sword-like wooden stick he called a foil or an épée. André would do his best to parry the thrust of the priest’s épée, dancing backward and then slipping forward. All the while Father Goiffon would be calling instructions: “The wrist, the wrist! Watch for the opening, now thrust!”

André knew he was gaining more skill every day. Once or twice he had managed to get under his teacher’s guard, thrusting his épée into the priest’s broad belly. And, today he had almost managed to knock his opponent’s foil from the good Father Goiffon’s hand!

André’s eyes glowed at the thought.

Yes, he did enjoy some of the lessons. But, all the same, it was wrong. He should not be whiling away time at such things when his parents worked. Lately it had seemed that Papa’s shoulder bothered him more. Many evenings Mama had rubbed it with the oil that had such a pleasant smell.

If I were at home, I could do some of the chopping and lifting that caused Papa pain. Even last winter it had been better. Then, if Joseph was not hurting on cold or rainy days when outdoor work was impossible, he had entertained them with magic tricks.

“You see this rope?” he would say. “Just a plain rope. See, I pull it straight out. No knots. Now I do my magic on it–abracadabra. And look! Oh, my, what has happened?”

Papa would shake his head, looking helplessly puzzled as he held out to André two pieces of rope–surely it was the same rope, but how had it become cut?

“Now what?” he would say. “Do you suppose I did something wrong? Let me try again.” And he would solemnly perform another magical act, and the rope would be whole again.

Other times he would make things disappear. Moments later they would find them again, in impossible places. For years, no matter how closely André watched, he could not see how it was done. Neither could Mama. She would cluck in exasperation when her darning egg–which she was sure was in her knitting basket–would suddenly be found in her pocket. Joseph would laugh at her amazed look when playing cards were pulled out of her apron, or a potato came out of her ear.

In the cold months of winter, André had finally learned how to do some of the tricks that were so mysterious when Joseph did them. Now he could pluck a spoon out of the air, or extract a ball of yarn from Berthe’s hair.

He had once showed the tricks to the others at school. The boys had all been friends, once–but not now.

Well, they would not sneer at him any more. He would quit the lessons, even the ones he enjoyed. He would stagger into the cottage under an immense load of wood, he would carry Berthe’s wash water. The minute he got into the cottage he would tell his parents what he had decided.

His eyes snapping and jaw firm, he passed the gate and started down the short path to the doorway. Supper would be waiting. Papa would be smoking his pipe by the fire, Mama knitting, and the table laid for the meal. He opened the door.

His parents were in their usual places, it was true. But he was not smoking; she was not knitting. They sat still, stiff, as if something had frightened them. Their faces showed shock and worry.

“Waters Like the Sky” was honored with the Jeanette Fair Book Award, by Delta Kappa Gamma Society International, presented April 18, 2015, at the Tau State convention in Bemidji, Minnesota. 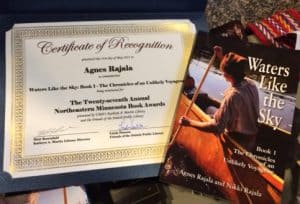 “Waters Like the Sky” was also nominated for a Northeastern Minnesota Book Award in the adult fiction category, presented by the University of Minnesota Duluth Kathryn A. Martin Library, Friends of the Duluth Public Library in collaboration with Lake Superior Writers. (Awards recognize books that substantially represent northeastern Minnesota’s history, culture, heritage or lifestyle.) The 27th annual NEMBA awards were announced May 21.