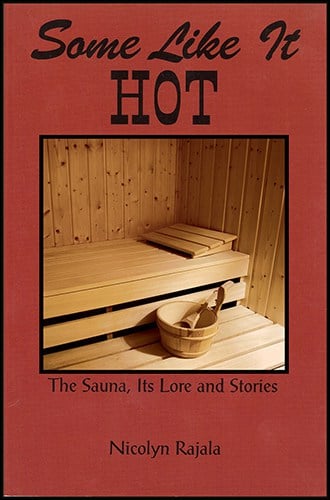 Whats all in this sauna book?

For starters, tips for athletes and health benefits. And saunas made from cars, silos, and ice blocks, ancient savusaunas to state-of-the-art saunas, war saunas to peace saunas, as well as sweat-bath traditions of other cultures. There are proverbs, legends and tales, plus funny stories about the Sauna Queen, nakedness, embarrassing moments, birthing in a sauna, and cupping, an ancient, mysterious treatment. Sprinkled among the pages are also a few recipes to try in the sauna. Did forget sauna reggae? Or where to take a public sauna? That’s here, too, and lots more.

“Why sauna? My friend Jerry asks. “Why do people do that? It sounds crazy, like some kind of torture.”

It does sound strange to those who have never had a sauna. Finnish people and sauna enthusiasts already know why they sauna. It’s simple: it feels so good. People like Jerry, the author of the quote at the beginning of this chapter, Greg Gutfield, and others who wonder about the sanity of those who appreciate saunas, will be able to appreciate the sauna after reading this book.

In the old days, as a matter of course, people in every country performed very hard physical labor. In “Sauna, The Finnish Bath,” H.J. Viherjuuri notes that, “The need for a perspiration bath has arisen in those countries where people have had to do exceptionally heavy physical work, such as clearing land by burning.” Those people recognized the need to perspire rather than to wash, in order to make their muscles supple and strong before they could continue heavy work.

Over time, the sauna took on other uses. The Finnish Sauna Society in Helsinki Finland, identifies five reasons why people of all cultures over the ages have taken sweat baths: as religious ceremonies, to heal illnesses, to cleanse the body, for relaxation, and for the social life.

Saunas were also used for house of farm chores that required heat or water because a sauna could be kept clean and bacteria-free—for birthing and preparing food.

In the past, people in Finland and North America used sauna for all of those reasons, but today the once-practical reasons of treating diseases, birthing babies, and preparing food aren’t practical any more. Nor is a religious tradition connected with most saunas today.

Today the main reason saunas are chosen is for their deep cleaning effects on the body. (See more about this in Chapter 10 on Health.)

But the sauna is more than a slow way to get clean: it soothes and provides invigorating mental regeneration.

“Nowadays,” according to the Finnish Sauna Society, “people go to sauna mainly for its relaxing effect. After a proper bath, you always feel better. It may be due to release of endorphins, although we do not know it for sure. But the mechanism is not important, [what is] important is that you really feel better. Both body and soul are cleansed in a Finnish sauna.”

While it is possible to feel refreshed from a shower, or soak out tiredness in a tub bath, the sauna far surpasses either as a means of rejuvenation. Amidst the smell of steam, herbs, and soap, the sounds of water splashed on hot rocks and the licking flames of a wood fire, and the dim light of a lantern, one can ponder life, feelings, the world’s great problems. In the sauna, thoughts can soar.

Sergei Khrushchev, son of Nikita and a recent citizen of the United States, who lives in Providence, Rhode Island, did just that. “I remember when I wrote one book. I went to the sauna with my notebook, where ideas came to my mind. I then included them in the book the next day, I think it’s very important for you to think about many things when you’re there.”

In fact, great philosophical concerns are raised in the sauna, as Mike Johnson, of Maplewood, Minnesota, can attest, remembering as a youth attending summer camp at the end of the Gunflint Trail in northeastern Minnesota.

Late one night, he and friends passed time taking a sauna in a building located away from the camp, which meant a long walk back. When he was finished, he took off alone to return to camp and to bed.

He hadn’t planned on staying in the sauna after dark, so he had no flashlight. He walked slowly in the dark, feeling ahead with his hands until, some distance down the trail, he ran into a large solid object across the path. It felt like a huge tree. He was stymied, because he didn’t remember a tree across the trail anywhere on the path.

Back at the sauna, he consulted with his fellow bathers. They hooted at him. “A tree in the path? I’m sure! No way.” Positive of the object but unsure of why it was there, Mike finally chose a longer way back to camp, skirting the object. Back at camp he repeated his story, and received similar disbelieving remarks.

The next morning, he went out to check. It didn’t take him long to discover what had happened, and to get the last laugh: while he and his friends had been relaxing in the sauna, they had gotten so mellow that they hadn’t heard a massive tree fall nearby, and for no discernible reason: no wind or storm.

Which brings up the philosophical question: if a tree falls in the forest while taking a sauna, and no one hears it, did it really fall? And did it make any sound?

This is a question best pondered and answered only in a relaxing sauna.

Mihael Cankar, an avid sauna-goer who amassed a remarkable sauna site on the Internet, says, “Sauna is not just any household building or washroom, where one carries out everyday tasks. Sauna is traditionally a special place. In essence it is unassuming, quiet, calm, meditative. And that is what it expects from the bather, too. One does not go to sauna merely to wash, but also to relax and freshen up and to be revived both mentally and physically.”

Is it possible to be refreshed after sweating? Beatrice Ojakangas, the well-known Minnesota cook, would concur. “Both summer and winter the sauna was stoked up. It was the most refreshing thing, even when we’d spend the day sweating in the hayfields and the weather was hot and humid.”

Finally, saunas build a sense of community. Finns commonly regard the sauna as a place to talk, tell stories and spend time with friends. Whereas Finns might shower to get clean, they go to sauna to increase the feelings of togetherness and closeness. This sense of sauna camaraderie is uncommon among Americans today.

But it is important for Finns to share their gift of sauna with others. Sylvia Krampl of Graz, Austria, tells the story of how her family discovered, and rediscovered, the Finnish sauna. During World Ware II, her father, a nineteen-year-old Austrian was conscripted into the German army and stationed at Murmansk. There he and other young soldiers not used to the rough climate all fell sick. But the Finnish people were friendly to the young Austrians and introduced them to sauna—a way of staying warm, clean, connected to friends and rejuvenated, all at the same time.

Most of the conscripts liked the sauna because it helped them stave off cold and colds. But the soldiers couldn’t leave their posts whenever they wanted to join the Finns for sauna baths, so they created their own makeshift saunas using materials at hand. The sauna helped them to survive the war. “It was a very good thing during a very bad time,” remembers Krampl’s father.

When the soldiers returned to Austria, they might have liked to build saunas of their own, but there was no time, no money, and no wood to spare for such a project. The young soldier told his family about saunas and encouraged them to try it. When his daughter was fourteen, she found her first opportunity. But—it was too hot, it was too strange. She remained unconvinced.

Then she hatched a plan—to convert her perfect-sized garden shed back home into an outdoor sauna. Though she will need a special permit, because most Austrian saunas are built into cellars, she eagerly plans to offer her father one of the first steams.

In short, the sauna makes you healthier. As Dr. Ilka Vuori says in “Healthy and Unhealthy Sauna Bathing,” in Annals of Clinical Research, “Sauna means health in the sense of good hygiene, relief of aches and pains, companionship, leisure time, freedom from everyday cares, physical and mental relaxation, good sleep and thus, general well being.”

The perspiration ping-pong, as Gutfield calls it, induces all those benefits, as every new sauna-goer discovers, and every regular sauna-goer knows.