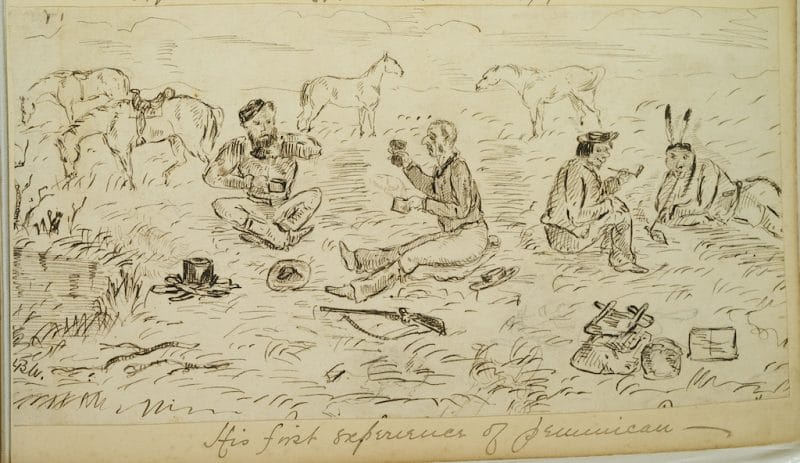 Tired of pea soup after 94 straight meals of it?

What if — as a voyageur — you didn’t love pea soup, the only food provisioned by the French-Canadian fur companies, your twice-a day meal for 6 weeks on the Ottawa and Mattawa Rivers? After 94 meals, your brigade would have been down to its last cup of dried peas by the time you’d arrived at the trading post at Sault Ste. Marie (or Michilimackinac). Fishing or hunting would take too much time. With miles to go before you reached the rendezvous — and even more miles to your wintering post — what would fill you up?

You’d be lucky, because Sault Ste. Marie and Michilimackinac were trading posts where your brigade would trade for wild rice and dried corn, dried fish and meat, harvested by aboriginal peoples. And pemmican, which they’d developed. You were in for a taste treat.

Pemmican is the original portable high-energy food, according to Atlas Obscura. Developed and produced by various Great Plains tribes, it’s a mixture of dried and pulverized buffalo meat with an equal amount of tallow; other available meats — moose, caribou, bear — could be substituted for buffalo. Wild fruits and berries * or maple sugar could be added to improve the flavor. 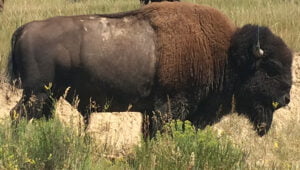 To make 55 pounds of pemmican required 400 pounds of fresh bison meat. The mixture of dried bison and tallow was stuffed into buffalo-skin bags and covered with more melted tallow. It was a staple in the tribes’ diet — and the voyageurs’ as well, from the 1780s — until the buffalo herds were intentionally decimated in the 1880s.

Pemmican was such a concentrated source of nutrition — with iron and other minerals, vitamins and trace elements — that voyageurs needed only about 2 pounds a day (compared to 8 pounds of fish or fresh meat a day!).

Atlas Obscura says that a single pound could pack in 3,500 calories (Voyageurs needed about 5,000 per day, more than double what today’s marathoners use.) 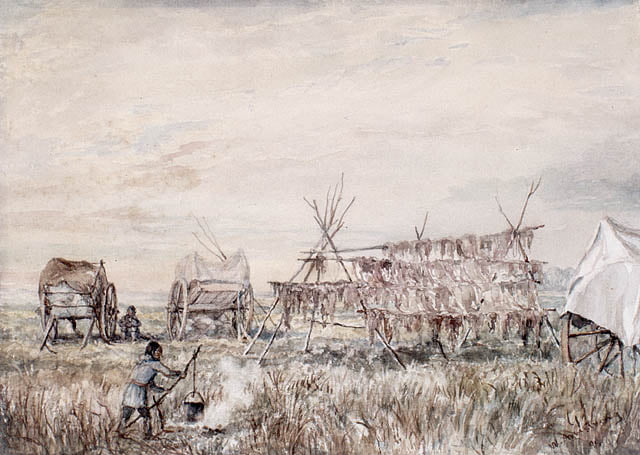 And it could last for months or even years without spoiling.

Wikipedia says that pemmican was so coveted that the first Hudson’s Bay Company governor of the Red River colony, Miles Macdonell, issued a proclamation in 1814 forbidding the export of pemmican to the North West Company. This started a Pemmican War with Métis who were shooting the buffalo and producing the pemmican. Fortunately the war was short-lived but tensions remained until HBC merged with NWC in 1821.

“His first experience of pemmican” in “Sketches of Hudson Bay Life” by Harry Bullock-Webster, about 1874, University of British Columbia. Library. Rare Books and Special Collections

Besides being adopted by the fur traders, Arctic and Antarctic explorers like Robert Perry, Ernest Shackleton, Richard Byrd and Roald Amundsen chose pemmican as one of their survival foods.

In Peary’s expeditions to the Arctic between 1886 and 1909, he ranked “first in importance” among his supplies. He wrote that it was the only meal …

“a man can eat twice a day for three hundred and sixty-five days in a year and have the last mouthful taste as good as the first.”

And in the Boer War, a form of pemmican — 4 ounces dried meat and 4 ounces chocolate — was issued as emergency survival food rations, to be eaten only at the order of a commanding officer. It promised enough energy to last 36 hours, if eaten slowly.

Does this make you curious?

If you’d like to make your own pemmican, Atlas Obscura offers modern suggestions in small amounts so you can savor the flavor of one of history’s oldest enduring foods. 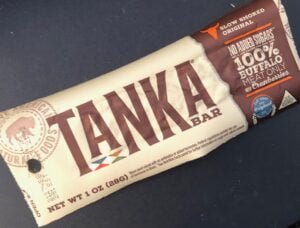 Or try a Tanka Bar, a snack bar with lean bison, dried cranberries and spices. It’s made by Native American Natural Foods, LLC, based in Pine Ridge, South Dakota.

Try the voyageur’s recipe for rubaboo: Add slices of pemmican and dried corn to a kettle of water and heat. Finish with bear grease and thicken with dried biscuit.

Cooks (then and now) might also use leftover dried peas and another thickening agent like flour. Authentic additions to this base might have included maple sugar, wild vegetables such as onion or garlic, parsnip, turnip or asparagus or meats like rabbit, prairie chicken or sage hen. Then again, you’re the cook. 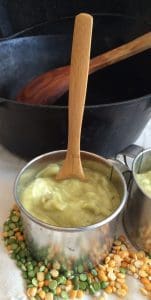 Rubaboo was a protein-rich stew that replaced the high-carb pea soup voyageurs had eaten for 6 weeks.

Eat like a voyageur — taste a Tanka Bar or make pea soup.
There’s more about food in “Waters Like the Sky” or “Treacherous Waters.” Purchase through PayPal. Or the ebook.
Request to be on the waiting list for Book 3.
Subscribe to this blog and read posts as soon as they’re published.
For current happenings and quirky discoveries, visit me on Facebook. I love your Comments.
Ask your library, local school, gift shop to buy copies of “Waters Like the Sky” or “Treacherous Waters.”
Book me as a speaker.
Become a voyageur for an hour — come to a presentation.