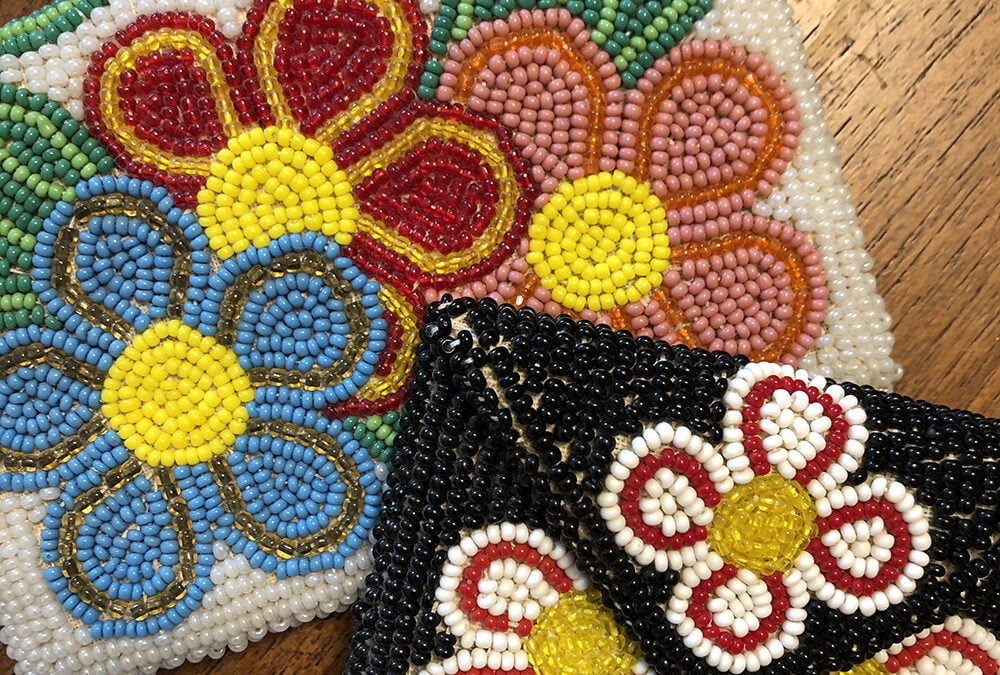 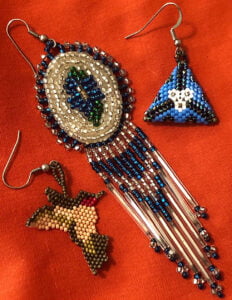 Beaders use a variety of techniques give to give expression to their artistry.

Beads were the smallest of the trade goods that the French-Canadian voyageurs carried. Tiny as they were, they packed a punch with color, sparkle and the myriad unique ways they could be combined. (I know — I love earrings and their pop of color and style.) Native peoples used beads to tell their stories and express themselves.

First Americans had long used wampum, beads made from shell and woven into belts, to note significant events in their history — ideas, contracts, pledges, treaties and compacts between tribes. Cris Peterson, in “Birchbark Brigade: A Fur Trade History,” says:

“The exchange of wampum became an important part of diplomatic protocol whenever Indians and European colonists concluded a treaty or assembled for other councils. …  Strings of wampum were used to sanction council proceedings, to vouch for the integrity of a speaker, to give responsibility to an office, or to honor a treaty. Messages of particular importance were also made into strings and sent by runners among the Iroquois. Various designs of beads indicated different ideas according to an accepted system that could be ready by anyone acquainted with wampum language, no matter what his spoken language was.” 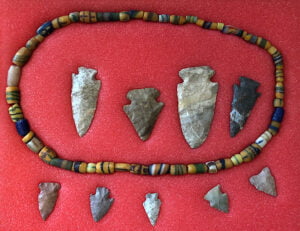 These sand-cast beads were traded by Hudson’s Bay Company.

Beads were popular trade items in North America long before the arrival of Europeans, who quickly took advantage of the Natives’ interest in beads.

However, little is written in the journals about trade beads, especially in comparison to guns, kettles, blankets and metal tools. Rarely is there more than a single word, whether on a list in the bales of goods the winterers portaged, or at a post, where a trader noted his day’s work. Occasionally “needles” or “thread” appears in the inventory. 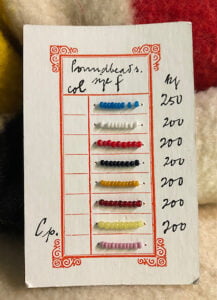 Blue and white were the most popular colors of pound beads, as determined by those found in archaeological excavations near Fort Union, North Dakota.

This card lists an array of colors of Pound Beads traded on the western frontier. According to information on the back of the card:

Seed Beads measured under 2 mm each in size while Pound Beads could be up to 4 mm each.Of 27,355 Pound beads recovered in 4 excavations [at Fort Union, North Dakota] between 1968 and 1972, blue and white opaques distinctly predominate, comprising 50% and 37% respectively. 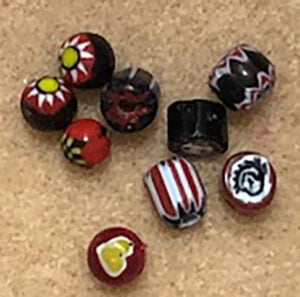 Beads from Murano, Italy, could be cut to show different patterns, like “stars”or chevrons.

“Star” or “chevron” beads were typical of French trade goods, though they were produced by glass workers in Murano, Venice. Layers of colored were ground a way in patterns to reveal the colors beneath the surface. Beads for the fur trade were also produced in Poland, Bohemia and the Netherlands.

Tribes could be identified by the different beadwork patterns they preferred. Ojibwe beadwork often features stylized flowers while Dakota and Plains beaders designed with geometric shapes. 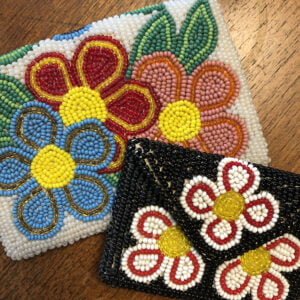 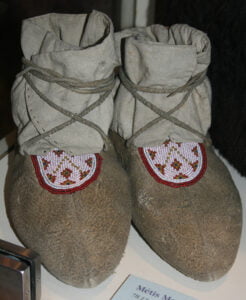 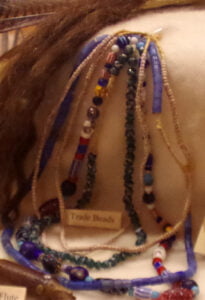 The museum at Forts Folle Avoine, in Danbury, Wisconsin, shows strings of beads that could be given as gifts or traded.

Instead of being traded, like a gun or blanket, beads might have been given as gifts. One trader noted his gifts: a First American husband received clothing, ax, chisel, knives, tobacco, chisel, awls. His wife also got a coat, shirt, leggins and garters — AND beads, along with scissors, garters, needles and thread.

Much later, an inventory from Hudson’s Bay Company listed beads of many colors — as well as barley corn, cut glass and gold metal — whereas 12 needles were valued as 1 beaver.

I was only 16 when I did this piece–it was much harder than it looks. Now my eyes and fingers aren’t up to the task.

Beadwork is harder to do than it looks. I began this when I had better eyesight and hand-eye coordination. It keeps me humbly aware of the incredible skill Indigenous women had, using a bone awl and sinew to stitch the beads (or porcupine quill) in a beautiful pattern.