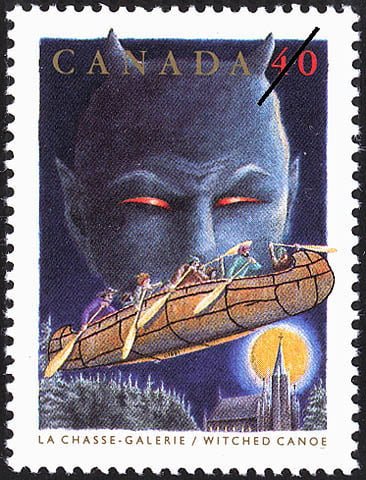 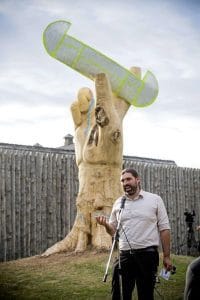 David Perett is the sculptor of The Flying Canoe.

Did you like reading the story of the Flying Canoe?

In print, the tale of the Flying Canoe, La Chasse Galerie dates back to 1891 but it was an old tale then and told across Canada.Some sources date it to Europe, and other versions have Native American roots.

Though I lean toward the voyageur retelling, it’s often told about French-Canadian lumbermen. Logging was a career that came naturally after that of canoe paddling/fur trading.

There’s lots of variation in the stories. One ends with the voyageurs being condemned to fly the canoe through hell and appear in the sky every New Year’s Eve. Another is that the devil is the steersman who tries to get the others to break the rules and is thrown out of the canoe by the voyageurs in order to save themselves.

This story is so much fun that I rewrote it as a Readers’ Theater script: a narrator and 4 characters from “Waters Like the Sky” exaggerate as they tell it to each other. Costumes aren’t required, it’s as easy as the book and takes about 10-15 minutes to “perform.” Given how creatively people are using Zoom, it could easily be done that way. Contact me (under “Submit a Comment”) and I’ll send you a pdf of the script.