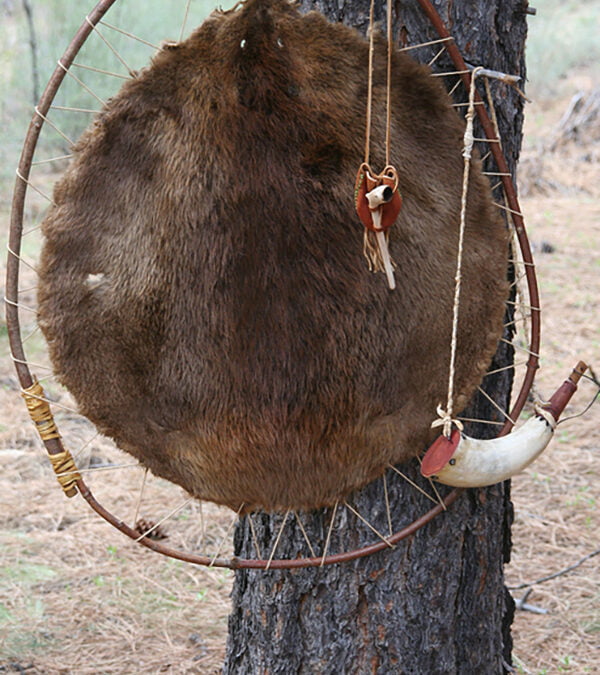 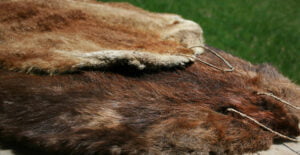 Beaver was aggressively trapped to the point of near-extinction. Other animals weren’t as valued but were trapped as well.

After I recently wrote a blog post about Fun Facts about Beavers, I got to wondering: 1. How many pelts did a single Native trapper bring in? 2. How many packs of pelts did the winterers at a fur post bring to the rendezvous? 3.What was the yearly take for the fur trade companies?

So I looked it up to see what had been written. Check out my sources at the end!

(Doesn’t have the same jingle-quality of the childhood tongue-twister, unfortunately.) 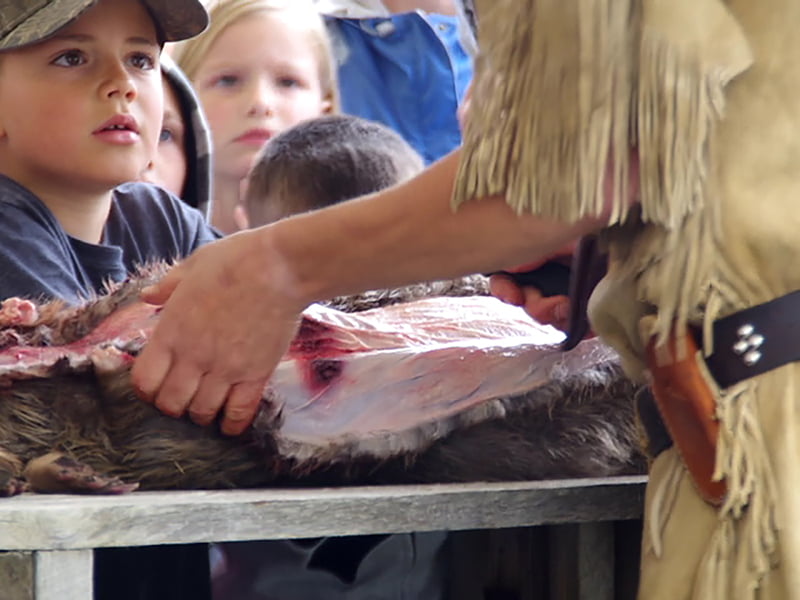 Skinning beaver is a laborious process.

Prime pelts were best harvested in late winter, when the animal’s fur had had grown long. Beavers could reach 60 pounds. Imagine slogging through snow on an icy shore with your hatchet, chopping holes to reach a beaver. Imagine hauling a pair of 60-pounders home one evening for your spouse to skin, tan and make supper from. Imagine scraping with a stone knife to separate the pelt from the body, then placing the pelt on a hoop to stretch it. Imagine doing that 50 times a winter—if your family had taken that much credit earlier in the fall for trade goods you wanted.

John Sayer was a North West Company partner who wintered near Pine City, Minnesota. (His journal was once attributed to Thomas Connor.)

Saturday, April 20 “… Chiefs the little Horn and the Plat brought only 25 Beavers in Value which does not pay their debts.
Sunday, April 21: the Plat gave me 10 Beavers in payment…
Monday, April 22: the little Horn gave me the Meat of Deer… this Afternoon all the Beaver Hunters arrived. They made a pitifull Hunt. I gave a Silver Medal to Mr Marin. (Chief Monsomanain).
Wednesday, April 24: all the Chiefs && Youngsters made their Appearance & little Horn. I gave them 5 Kegs mixed rum, 3 Carrots Tobacco & 2 fathoms twist tobacco. required about 60 Skins in payment of their Debts.” 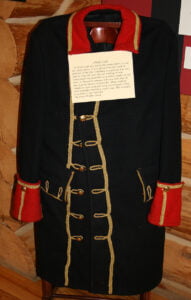 A fancy uniform or “chief’s coat” was given to exceptional trappers to encourage them, and others to compete. It also undermined the actual leaders and chiefs of a tribe.

In Lake Superior to Rainy Lake, on September 29, 1817, Little Deer’s credit was “50 Made Beaver.” Roderick McKenzie, master of the HBC fort, recorded credits of Little Deer and others. As an award for such exceptional trapping and hunting, Little Deer had been promised ‘chief’s clothing’ by McKenzie’s predecessor.

Total for 1 man=50 Made Beaver 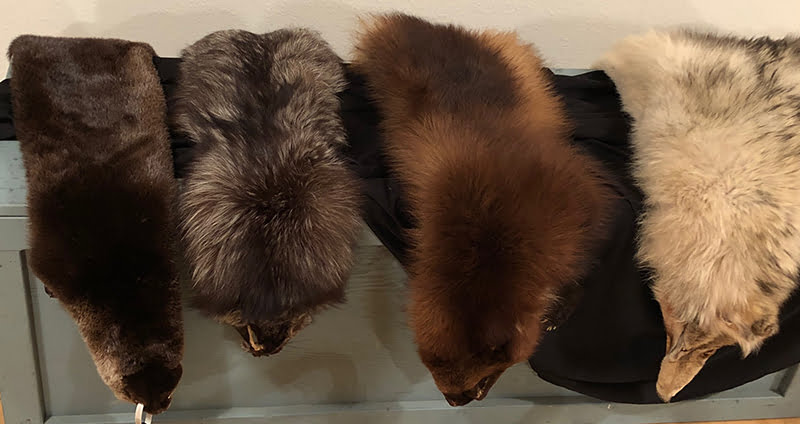 When a post didn’t have 40+ furs of a single type, they made “miscellaneous” packs containing otter, fisher, fox, wolf and other pelts.

Native trappers brought their pelts to a post where they were sorted and cleaned. Those with crawly critters were salted, stacked and pressed with stones. When the post had 40+ beaver pelts, they compressed them using a fur press, wrapped them in canvas, sewed them and marked the packs of 85-90 pounds each. If the winterers couldn’t complete a full pack of a single fur, they’d make packs of miscellaneous pelts.

A History of the Ojibwe by William Warren

“In 1784, pioneer trader Michel Cadotte (whose father and older brother were traders) was the first white to winter among bands by the Chippewa River and Namakagan River, branches of the St. Croix River, near Lac Coutereille, Wisconsin. They collected 40 packs of pelts, estimated to weigh 85-90# and contain 50-75 beavers each.”

This device, a fur press, compressed pelts to into tight bundles, which were wrapped in canvas, sewed shut and marked.

“Friday [May] 18. … I left immediately after they did, Savoyard and Connor in the big canoe with 7 packs, Boisvert and I in one of 3 brasses length with 3 packs and my personal baggage. We camped at St. Croix portage.

“Sunday [May] 20. Mr. Reaume came to camp near us, his men and mine made the roadway, cut some large and small poses for the canoes; he has 4 canoes, 8 men and 37 packs, of which 16 are beaver, 3 bear, the others deer skins and miscellaneous.” 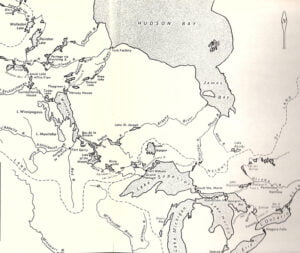 This map of Hudson Bay shows the river systems where beaver and other furs were harvested. (“Fur Trade Canoe Routes of Canada/ Then and Now, Eric W. Morse)

In The Conquest of the Great Northwest …, Agnes Laut notes Hudson’s Bay Company beaver receipts as reported in Samuel Hearne’s “Voyages” from 1799: (It’s not clear whether these are packs or individual pelts.)

In Superior Rendezvous, Jean Morrison cites the harvest in 1806 in “North West Company Returns of Outfit of 1805, receipted at Kaministiquia.”

The fur trade after 1821 underwent great changes due to the North West Company merger with Hudson’s Bay Company, ending the intense rivalry for furs. Once a major location, Fort William (Kaministiquia) was reduced to a minor headquarters. However, it monitored the increasing number of American fur traders south of the border. You can see how the fur harvest varied widely from year to year, with the year 1863 showing the highest beaver harvest of all.

A bale of cargo held 40+ beaver pelts. Larger hides like bear or buffalo, or less valuable pelts were shipped by schooner, not voyageur canoe.

This chart below of the Northwest Ontario fur harvests from 1990-91 to 2000-01 extracts the beginning and ending years to offer a sense of current fur harvests. The chart notes that non-native compliance with reporting is nearly 100% but native compliance with reporting is much less; more furs were harvested than are listed. “Northwest Ontario Fur Harvests, 1990-91 to 2000-01”

Fascinating. Voyageurs carried all those pelts on their backs. George Nelson, in his journal, mentioned that bison, bear and heavier pelts, as well as less valuable ones, would be shipped by schooner across the Great Lakes. But manual labor toted and paddled them to Fort William.

Whew! That’s a lot of pelts, and an incredible amount of labor. And now we know how many beaver pelts a trapper could trap, when a those beaver could be trapped, or a trading post could press packs or a fur company could sell furs. All for the production of stylish and durable beaver hats. It’s such fun researching “What Would Andre Be Doing?”. 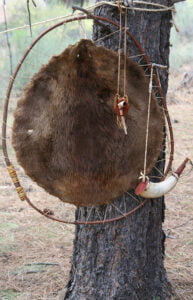 A beaver hide is stretched over a hoop. A beaver could weigh up to 60 pounds, and its pelt about 2 pounds.