Moccasins: A story on your feet 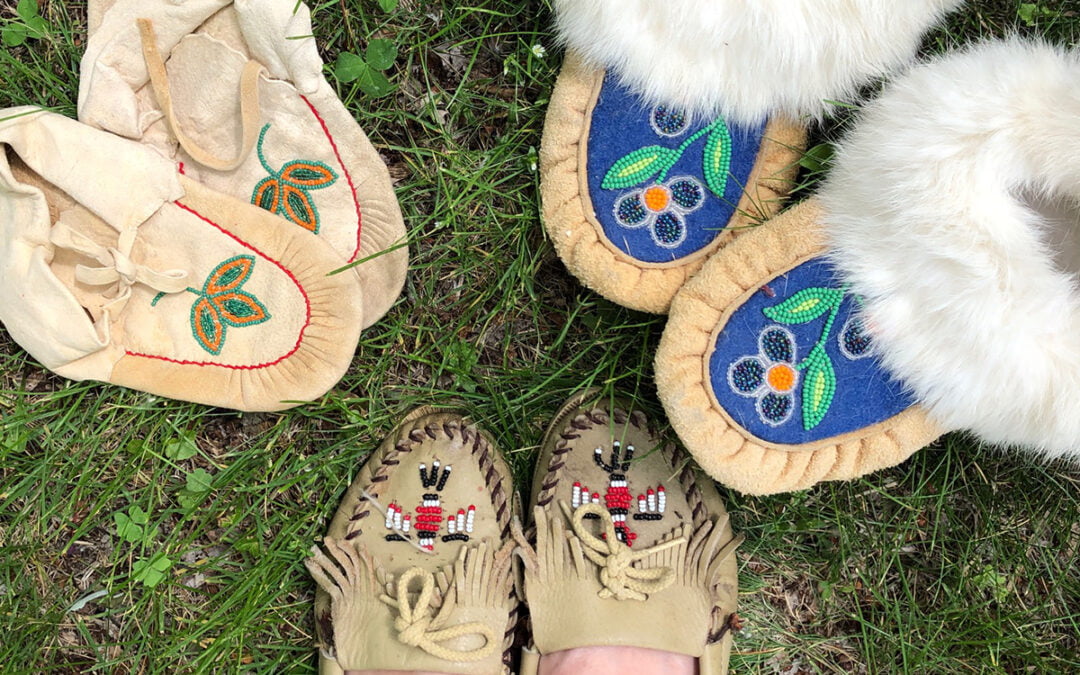 “Hiding in a copse, the lad held his breath as a half-dozen warriors dashed past. He dare not move, seeing only their feet. Uh-oh! Not moccasins like the friendly Wyandottes wore! Enemies!” 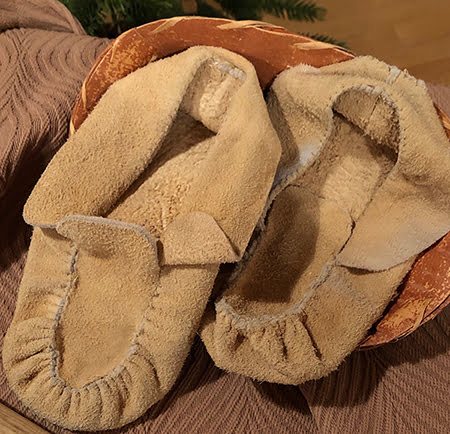 Two weeks later, in another book, “Hanta Yo, ”I read about an adept tracker from a Great Plains tribe who could study a footprint and identify the tribe based on stitching or heel fringes that left a distinctive mark.
These episodes from separate books jolted me to look DOWN to appreciate what was on people’s feet. I’d been trained to look UP — at people’s hair, their faces, their clothing. You too?

Wow! I never realized that tribes could be identified by their moccasins. It opened up a wealth of information that hadn’t occurred to me. (Nor did it occur to my character Andre in Books 1 and 2. In Book 3 he’ll have to pay attention. Hmmm. Recalculating … recalculating…) 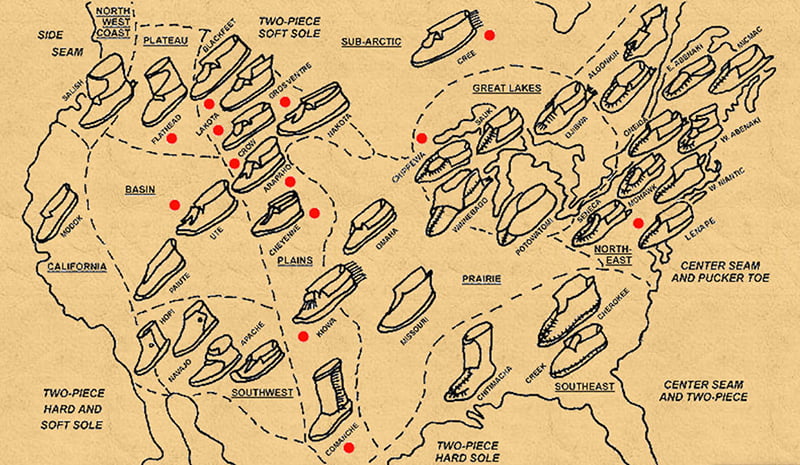 Moccasin styles vary widely across the US, as seen in this graphic from Native Tech and other sites.

I discovered this map, available on Native Tech (and several other websites) showing how moccasins varied across American tribes. (To see actual photos of moccasins from those areas, click on this Native Tech link and then on a red dot. The website even has patterns for cutting and sewing moccasins!)

A history of moccasins (thanks to Native Tech) 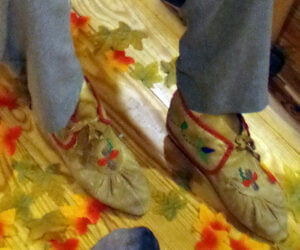 The puckered-toe style was used in woodland forests. Seen at Forts Folle Avoine in Danbury, Wisconsin.

The word “moccasin” — or mocussinass or mockussinchass — originated with eastern North American tribes, meaning “a shoe with a puckered toe” (that U-shaped vamp over the instep). In fact, the word for the Ojibwe tribe might mean “people of the puckered moccasin” (there are other options).

Over the years, I’ve acquired a few pairs of hand-made moccasins. 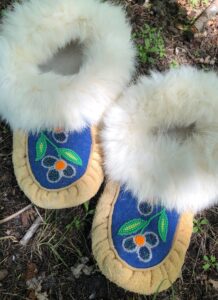 Warm moosehide moccasins, from The Bay store in Winnipeg, Canada

The fancy ones, made of moosehide, came from the Hudson’s Bay Company Store in Winnipeg. Besides the rabbit fur cuffs, I love the beautiful woodland beading on a blue wool background. The upper piece has a line of extra moosehide piping. Inside, they’re lined with sheepskin. On the sole, an “8” is written in pen (size 8?). Ojibwe-made, perhaps. What a luxurious pair for winter! 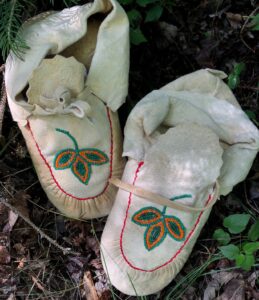 Smoke-tanned deerskin moccasins purchased in 1970 for $15 in northern Minnesota.

Another pair is definitely Ojibwe-made of smoke-tanned deerskin, with green and orange beading in a woodland design and decorative red stitching around the toe. The sole is thicker than the collar. Tiny hand stitches attach ties to the collar — (Oops! I tugged too hard and lost a tie). Inside, the upper is lined with a sturdy fabric, anchoring the beadwork. On the sole, it says “8 1/2” but they barely measure 8 inches. The price tag lists them as $15.00, two days’ wages for me when I bought them! I have another pair — somewhere.

Mom’s Minnetonka Moccasins — now mine — are machine-made, with a red and black beaded thunderbird and a cute fringe and tie on the vamp. That thick composite sole is sturdy enough to wear on sidewalks and paved surfaces without fear of destroying them — I could easily walk a mile in these moccasins. Even the cord stitching hasn’t needed replacing. This modern style is just fun to wear. And Minnetonka mocs are widely available.

And do you know about Manitobah Mukluks? It’s a Canadian company of Native artisans who also craft moccasins, mittens, gloves and bags. Take a look at their stylish designs. I am lusting after a pair.

Instead of boots or shoes, French-Canadian voyageurs usually wore moccasins. Why?

It’s fun to learn about the different styles and why they were used. I’ve decided that in Book 3. the moccasins of a tribesman will create some anxiety. No, I won’t tell you — you’ll have to wait.