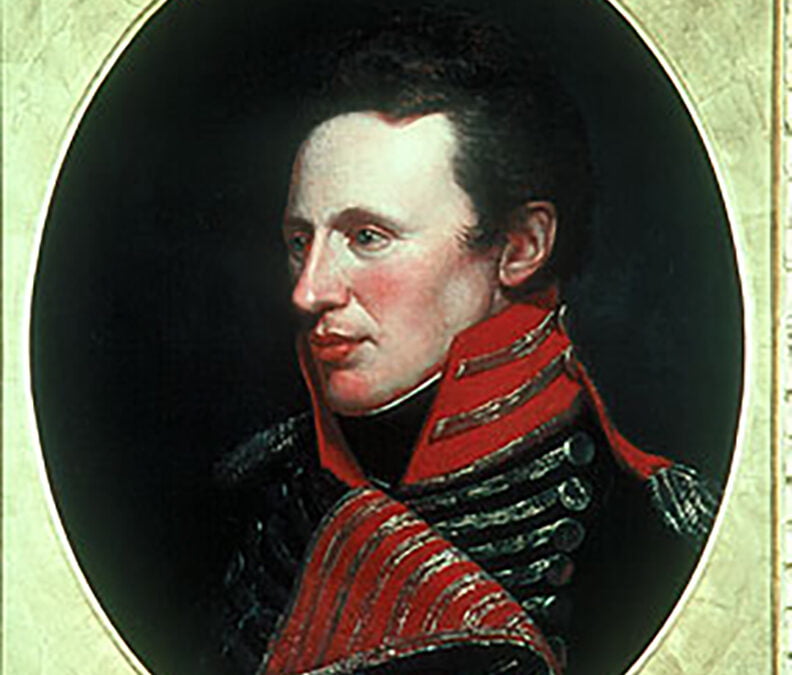 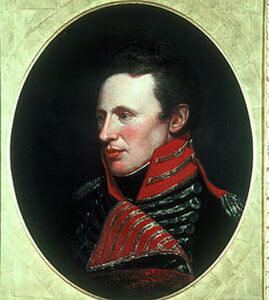 Did you read biographies as a kid? Bigfork’s tiny public library had one shelf of biographies for youth, jacketed in red and yellow, illustrated with black and white drawings. After finishing the life stories of all the women (maybe 7 total), I kept on, reading about men like Lewis and Clark and the Corps of Discovery crossing the continent and mapping it 200+ years ago, and cataloging its plants and animals.
But Lt. Zebulon Pike, Jr. who actually reconnoitered close to where I grew up, didn’t impress me. Maybe because he was “hero-ized,” and none of the real life personality came through. Did that happen to you also?
When I recently realized that Pike visited IN Minnesota IN 1805-06, the exact years of Book 3 in Andre’s Unlikely Voyageur series, I dug deeper. I’m glad I did—interesting stuff!

Who was Zebulon Pike, Jr.?

Before he was assigned to the Expedition on the Upper Mississippi, Pike, 26, had worked in military payroll and logistics. He may have been bummed—Lewis & Clark, who were not that much older, got the plum task of exploring the west whereas the Mississippi had long been mapped, starting in 1670 with

National Park Service ranger David Wiggins, who gives talks at Pikes Peak State Park in northeast Iowa, didn’t think much of Pike either. “He was a puffed-up little popinjay who had all these pretensions to greatness.”

Pike’s expedition was tasked to: 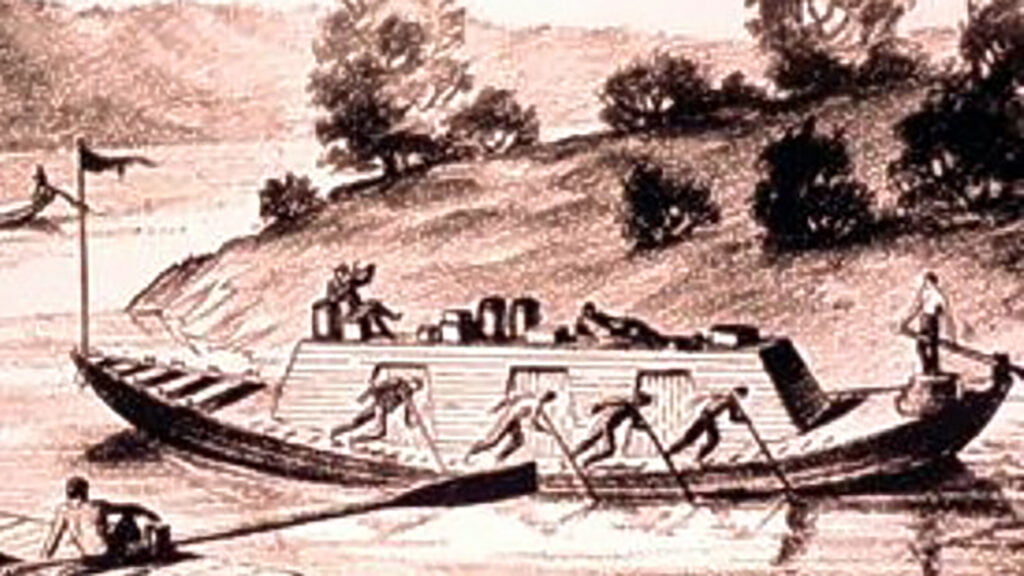 Lt. Pike left St. Louis August 9, 1805, with 20 men poling and paddling a 70-foot keelboat (like Lewis and Clark). However, a keelboat wasn’t suitable for the Mississippi, always full of islands and shoals and getting shallow that late in the summer. His men were soldiers, not voyageurs, dragging the keelboat over sandbars and rapids, achieving barely 5-10 miles a day.

When his dog disappeared, two of his men offered to search for it. However, Zeb, Jr. didn’t wait for them—he drove his crew relentlessly. Eight days later, the two, plus the dog, amazingly caught up with the crew who’d arrived near Dubuque, Iowa, having been helped by a Scottish trader and a Fox Indian chief.

By September 4, the group arrived at Prairie du Chien, exhausted at the drudgery of dragging their heavy boat. They stayed two days. While there, Pike started Job No. 1—he selected a bluff as a site for a future fort (never used—it got changed for a lower site). He also swapped his keelboat for barges. With a long way to go and the autumn weather ahead, they continued upstream.

He liked the scenery. At the Sugarloaf bluffs around Winona, Minnesota, Pike mentioned its rare and romantic beauty in his journal. After hearing the legend of a woman throwing herself off Maiden Rock, Wisconsin, rather than marry, he wrote, “a wonderful display of sentiment in a savage!”

On September 21, after more heaving and hauling their barges over falls and rapids, they arrived at the confluence of the Mississippi and Minnesota rivers, (the Minnesota then known as the La Rivière de St. Pierre). It was perfect for a fort. Within two days, he checked off Job No.1: get land for a fort. He convened seven Dakota chiefs and convinced two to sign a treaty in English (a language none of the chiefs spoke) for $200,000, plus trinkets and whiskey, in exchange for 100,000 acres of their homeland—what would become Minneapolis and St. Paul.
However, Pike had no actual authority to spend government money and the treaty was a low in government deal-making.

However, Pike showed himself poorly the following day—his flag went missing and he beat one of his soldiers, in front of the Dakota. The next day, Chief Little Crow told him the flag had floated 15 miles downstream, and had two of his braves return it. Did he apologize? He didn’t note that in his journal. Some “oops” occasions for Pike, but he had a thousand things to do and moved on. 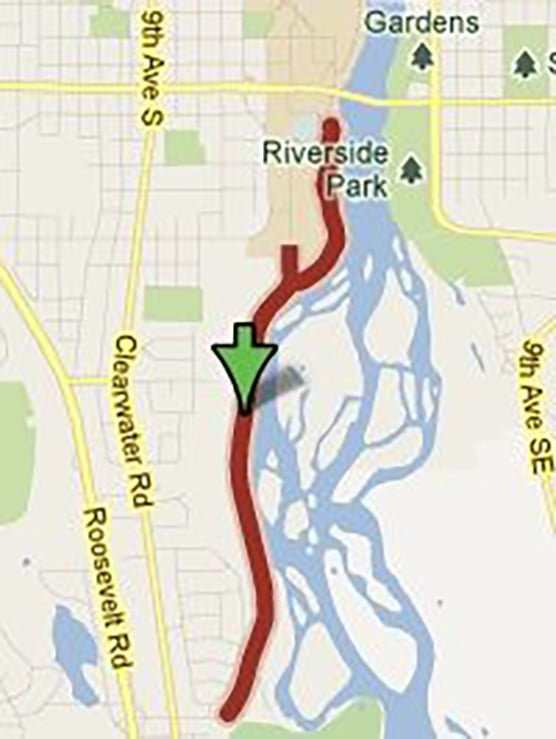 It required three days to get around the brutal Falls of St. Anthony. Seven men became ill due to Pike’s intense pressure to keep slogging, and the rest dropped from exhaustion.
A few miles downstream of the rapids at Sauk Rapids, Minnesota, Pike encountered a series of beaver dams that choked the river, making navigation difficult. He dubbed the area “Beaver Islands.” (Personal note: very close to my old apartment!)
His men trudged on, dragging and portaging his barges over many rapids, though his sergeant, corporal and others lost much blood due to the Pike’s demands. Finally they came to rapids near Little Falls, Minnesota, about October 16. But now the temps were dropping and snow was falling! They built a stockade.
They also started prepping dugout canoes. Dugouts? Apparently he didn’t notice the local Indians and fur traders all paddled light, efficient birch bark canoes. However, Pike went with what he knew—dugouts.
As soon as the first dugout was complete, Pike ordered his gear and special black gunpowder to be loaded. Guess what sank?
And if it was your special gunpowder, you’d save it, right? Pike ordered his men to dry it on trays—over the fire—in the tent.
Guess what exploded? Guess if the tent survived?
A couple of errors in judgment, should we say?

Getting the tasks done (sort of) 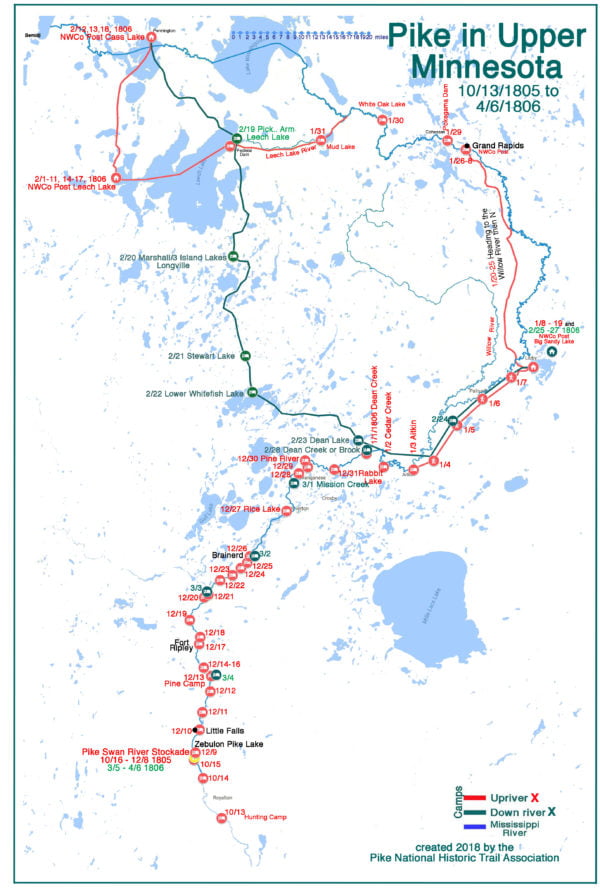 With the arrival of winter weather and the completed stockade, Pike headed north on December 8 with most of his crew—on sleds. The three most exhausted remained at the stockade.
They stopped at the fur trade post on Sandy Lake to get directions to the one on Leech Lake. At that North West Company post—run by a British trader—he enjoyed the hospitality of the winterers, borrowing clothes, and getting their expertise. Pike then thanked the proprietor by shooting down his Union Jack flag and hoisting his own US flag. Perhaps there’s a reason the trader accompanied him to another post, and offered sled dogs, sled, snowshoes and a French-Canadian guide.
He stayed at several more British posts. Pike wrote a scathing letter to rebuke their trade practices. The proprietor of the Fond du Lac Department answered back in a letter, apologizing, promising to honor future tariffs.
Job No. 2—end British trade. Done. However, when Pike left, trade resumed as usual.
Job No. 3—broker peace among the various warring Indian tribes. Check that off list.
Wabasha, a Dakota chief, gave Pike a ceremonial pipe to smooth his way upriver. Further north, Pike met with many prominent Ojibwe chiefs, pressuring on them to surrender the British medals and flags given as tokens of allegiance for his American replacement medals. From the Ojibwe chiefs, Pike received diplomatic tokens to present to Dakota chiefs in a gesture of reconciliation. He also invited them to attend a peace conference in St. Louis, but all declined the invitation—it meant traveling through a thousand miles and back in hostile territory. The Dakota, Fox, Ojibwe and other tribes may have enjoyed a short time of peace, while Pike was there. However, it did not last.
Job No. 4—find the source of the Mississippi River. This was of critical importance. Previous British maps indicated the headwaters might even be in Canada. Pike got to Sandy Lake, and Leech Lake. On a short side trip to the NWC fur post on Cass Lake, he took readings, determined its latitude and designated it the true source of the Mississippi.He had to get back to St. Louis. However, Cass Lake was close enough for government work, as they used to say. 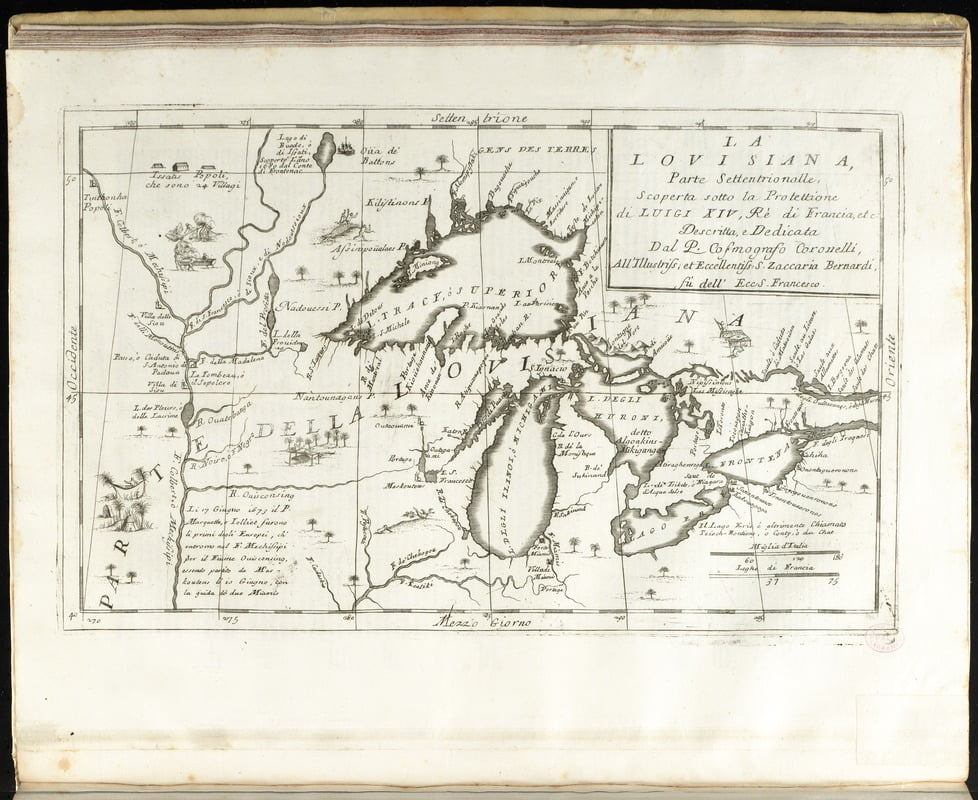 In this 1697 map, the Mississippi begins far north of Lake Superior. It was drawn for Louis the XIV, the Sun King.

Having sort-of accomplished all four missions, Pike and his men returned to Little Falls about March 5, left April 7 when the ice was off the river, and paddled/poled back to St. Louis April 20. He left after Lewis & Clark, he returned before them.

Did you notice there were a lot of howevers?
Pike’s other talents: excellent hunter and often supplied his crew; immense stamina—he covered a lot of territory, even if his moccasins were full of bloody blisters.
Other faults: recklessly brave; didn’t mind using alcohol to seal deals, but spied on his men while they were carousing so he could report them for punishment; his mentor (Gen. James Wilkinson, actually a double agent for Spain) ordered him on Expedition #2, to the Southwest, where he proved to be even more recklessly brave.
Do the pluses outweigh the minuses?

What will I do with this?

Having personality flaws makes Zeb Jr. infinitely more interesting to me. In Book 3, Andre won’t meet him, but the British certainly have a powerful interest in getting insider information. After all, their illegal trading is about to end. How will they find out he’s coming, and what he’s like? That will be fun to write.