Why did so many voyageurs come from Sorel? 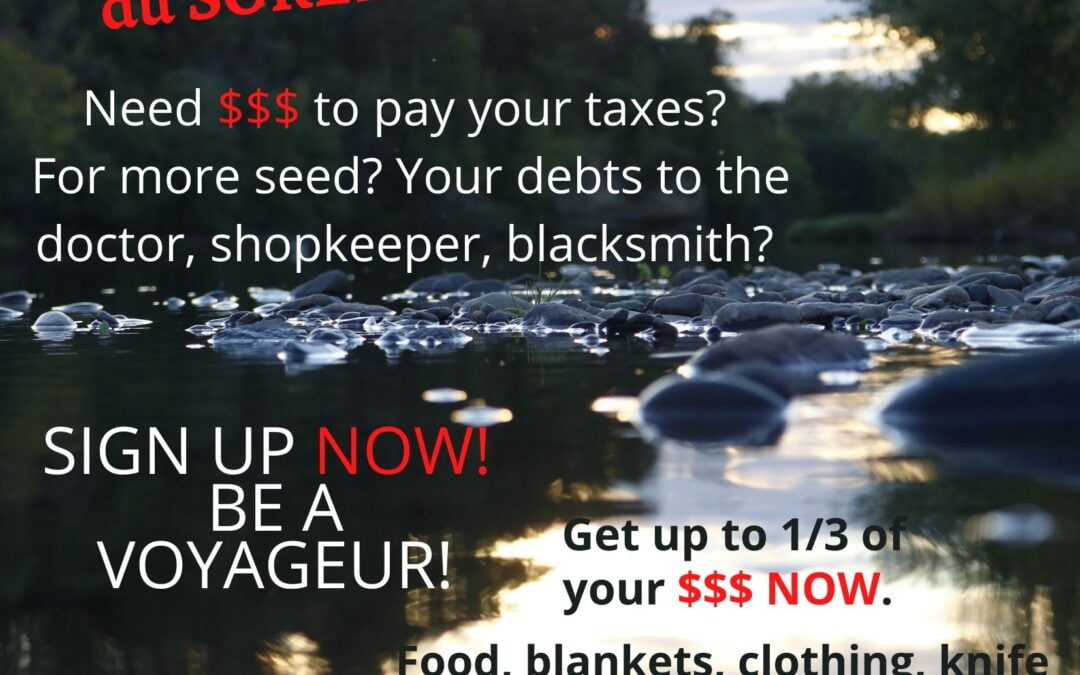 If you have voyageurs in your French-Canadian ancestry, some of your forebears may be from Sorel. The hamlet provided many engages for the fur trade, actually. Why? Did some towns send more of their sons than others? And what attracted the men to doing such hard labor of paddling and portaging?

I found some answers in Carolyn Podruchny’s book “Making the Voyageur World: Travelers and Traders in the North American Fur Trade.” She says,“Between the 1790s and 1820s, large numbers of Sorel men entered the fur trade, amounting to well over a third of the adult male population.”

Why did men from French-Canadian villages become paddlers?

It started with land—the need for farm land, and the problems of producing enough to support a family.

Land parcels, laid out in long ribbons that abutted the St. Lawrence River, was distributed by seigneurs (feudal lords), who then granted land to peasant farmers (the habitants) who paid rent or eventually bought land. Many farms were self-sufficient. With surplus grain—mostly wheat—they could trade for items they couldn’t produce on the farm—salt, sugar, coffee and tea—and hardware like barrels and iron goods.

A short piece of land abutted the river in the seigneurial system.

But some habitants couldn’t get ahead. They may have accumulated debt to purchase their farm and clear the land. There were years with poor crops due to late frosts, flooding or droughts—or poor soil. Not all had the skills to make a living as a farmer.

When families couldn’t produce enough beyond their own needs and their seigneurial dues, they needed another source of income. In the fur trade, they could work intermittently while managing their farms during other seasons.

Did they come from certain parishes?

Poorer parishes around Montreal and Trois-Rivieres became “voyageur parishes.” Early on, between 1701 and 1745, Podruchny says (citing historian Allan Greer) that:

Parishes such as Sorel? 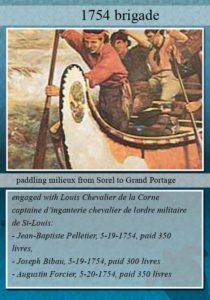 Oui. Sorel was one voyageur parish, with poor, sandy soil. Located on the south shore of the St. Lawrence, where the river enters Lake St. Pierre, and with many islands, the habitants would be adept with boats. And the parish was far enough from the city (Montreal is 43 miles away) to be unaware of a labor market where they might receive higher wages and better working conditions.

By the late 18th century, wheat could not be productively cultivated. To earn wages, that’s when Sorel’s young men entered the fur trade in droves. Think of it, one-third of all men of the community, for about 30 years. Think how that would change the women, the children, the men who stayed.

Soil farther away from the river was rocky and steep (while nearer was richer). Parts of Maskinongé, on the St. Lawrence’s north shore and 75 miles from Montreal, also had poor soil and its impoverished habitants chose seasonal work in the fur trade.

Did the fur trade companies prefer men from certain areas? 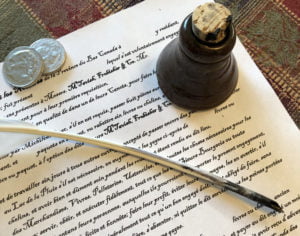 Because the urban employers in Montreal paid higher wages, fur trade companies recruited paddlers from the distant countryside. They expected them to be “cheap and docile” and experienced. Plus they didn’t have to pay equivalent wages to local skilled or unskilled labor.
Another asset of peasant labor—men were less likely to form ‘combinations’ or strikes against their employers than were urban workers because they were scattered throughout the countryside much of the time and were seldom close to complete poverty.” Urban men had fewer food or hunting/trapping resources than those in the country. 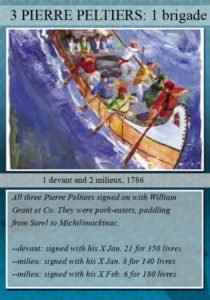 If a man served in the fur trade, chances are strong that his brothers and sons would continue the tradition and sign contracts. Stories—sagas of paddling the wild waters, surviving as a winterer, trading with the tribes— would be retold for generations, along with key information that introduced men into that way of life. Over time, up to 12% of some parish male populations worked in the fur trade.

So yup, Serving in the fur trade reflected both a community tradition and a family need. What were their alternatives? And if you didn’t want to work at a trade (apprentice for up to 7 years), how else could you make a living?