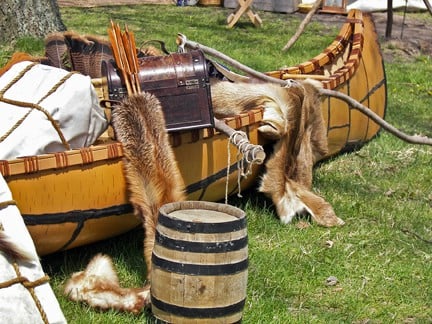 Get your stopwatch — how many ‘P” words that describe the fur trade can you name quickly? Kudos if you get more than 5 and a gold star if you think of 10. Well, actually there’s more than 17. Then compare your tally to this unofficial list.

Interestingly, two of these P words are uncommon measures of distance. (By the way, I’ve italicized the words that are French, though they may look English to you.) 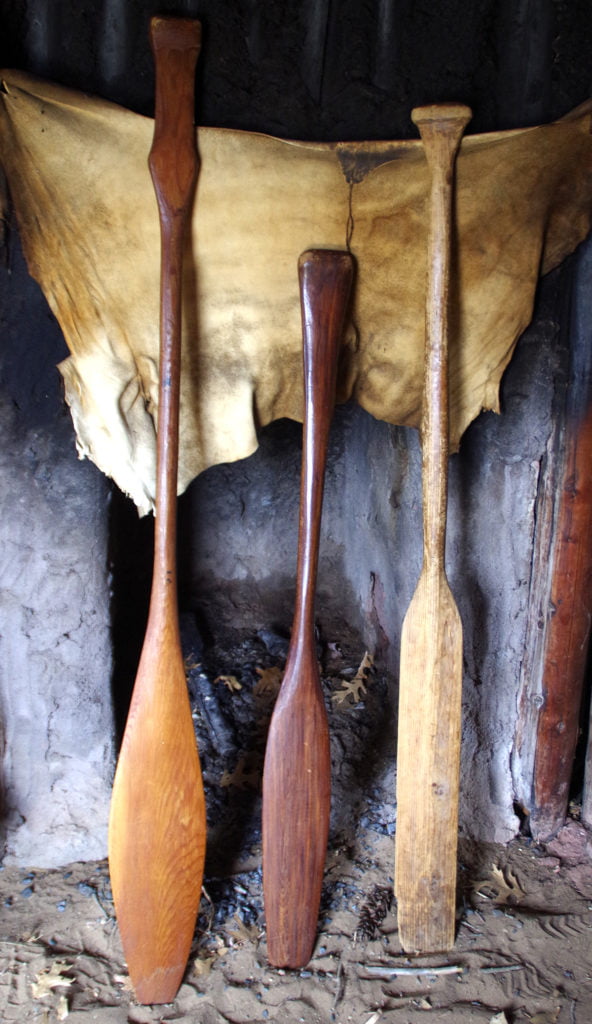 Paddle: Paddling is how we picture the voyageurs, six to 12 men in a canoe (depending on its size) paddling in unison. You may be interested to know that their paddles were shorter and narrower than paddles are now, because men made short fast dips, unlike the longer, deeper draws in small canoes we now use. The rate of paddling was about a stroke a second, and faster when more power was needed in tricky places. The devant (or avant) and gouvernail, standing at opposite ends of the canoe, determined the pace. The guide assigned who sat where. They didn’t switch places, or maybe even sides for the whole trip.

Poles: Going upstream, the steersmen placed metal tips on 10-foot setting poles to direct the canoes — poking away from fallen tree trunks, prying away from submerged boulders. When they started downstream, at the French River, the steersmen switched to paddles (longer ones, because remember, they were standing) — and tossed out their setting poles with a ceremony and bit of celebratory high wines. 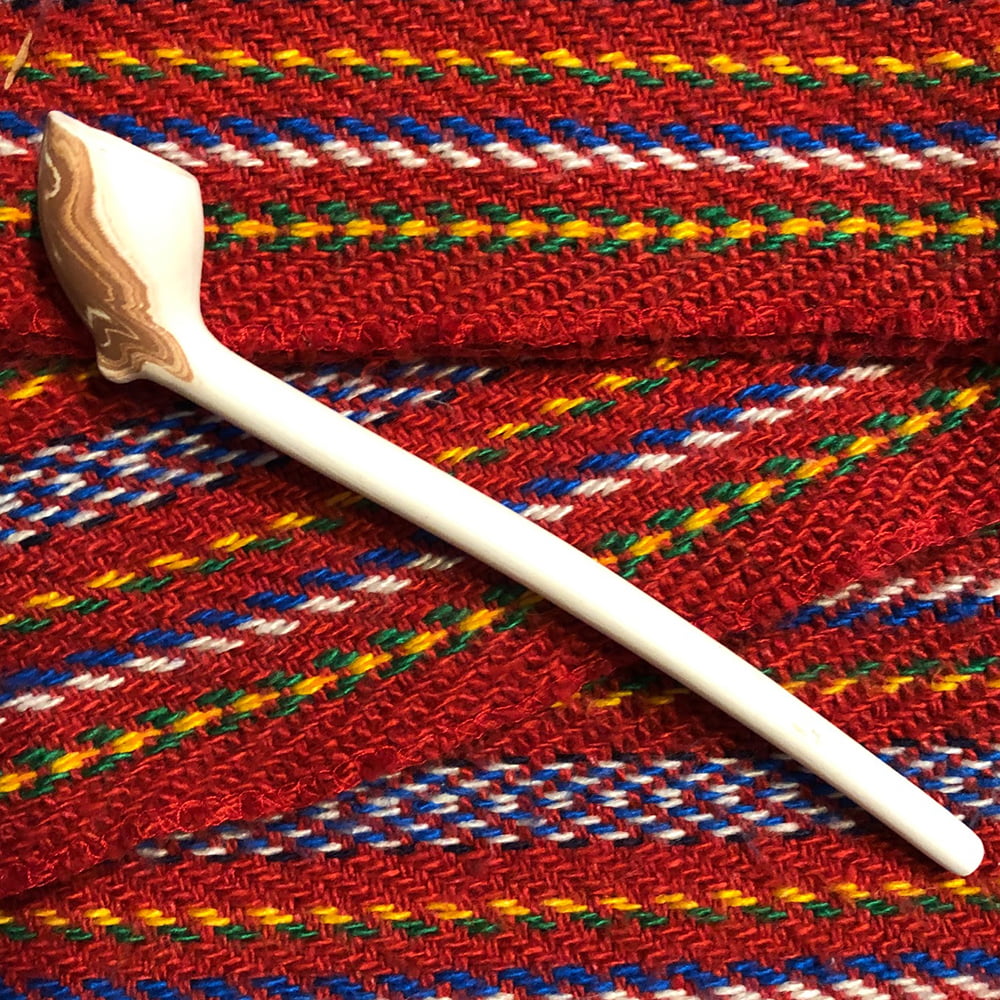 Pipes were for smoking — and measuring the distance across lakes.

Pipe: Besides what you know of pipes, they measure distance! Every hour (especially on lakes), voyageurs would stop for a break about five or ten minutes. They’d lay their paddles across their laps and pull on their white clay pipes for a smoke. The break came to be known as a “pipe.” Because of that, distance came to be measured in pipes, estimating the length by the number of times they stopped. A “three-pipe lake” took three hours to cross — we would say it’s 12 miles.

Poles: Going upstream, the steersmen placed metal tips on 10-foot setting poles to direct the canoes — poking away from fallen tree trunks, prying away from submerged boulders. When they started downstream, at the French River, the steersmen switched to paddles (longer ones, because remember, they were standing) — and tossed out their setting poles with a ceremony and bit of celebratory high wines. 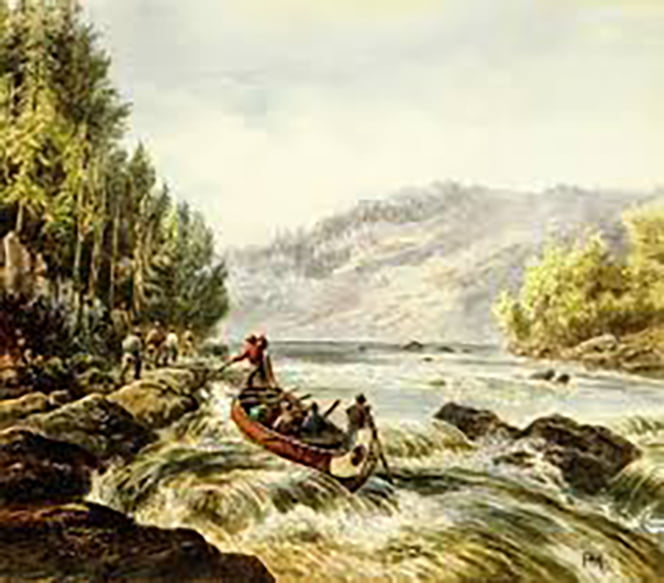 Canoes were pulled (also called tracking or lining) over waters too shallow for paddling .

Pulling the canoes: (This is more often called “tracking” or “lining,” or in French, décharge.) At shallow, rocky, dangerous places, the steersmen might call for a décharge. The men would tow the canoe using long ropes tied to the bow and stern of the canoe. There were not lovely tow-paths — the men waded in icy swift waters seeking stable footing on slippery rocks. If the water was deep enough, the voyageurs towed it fully loaded — about 4 tons’ worth. In shallow water or with too many boulders, the steersmen might order half, or all, of the trade goods to be carried across separately. If the brigade were delivering an important bourgeois or clerk for the North West Company or Hudson’s Bay Company, they got to ride.

Voyageurs often needed to carry the trade goods.Of course you know portaging, but how they did it may surprise you. 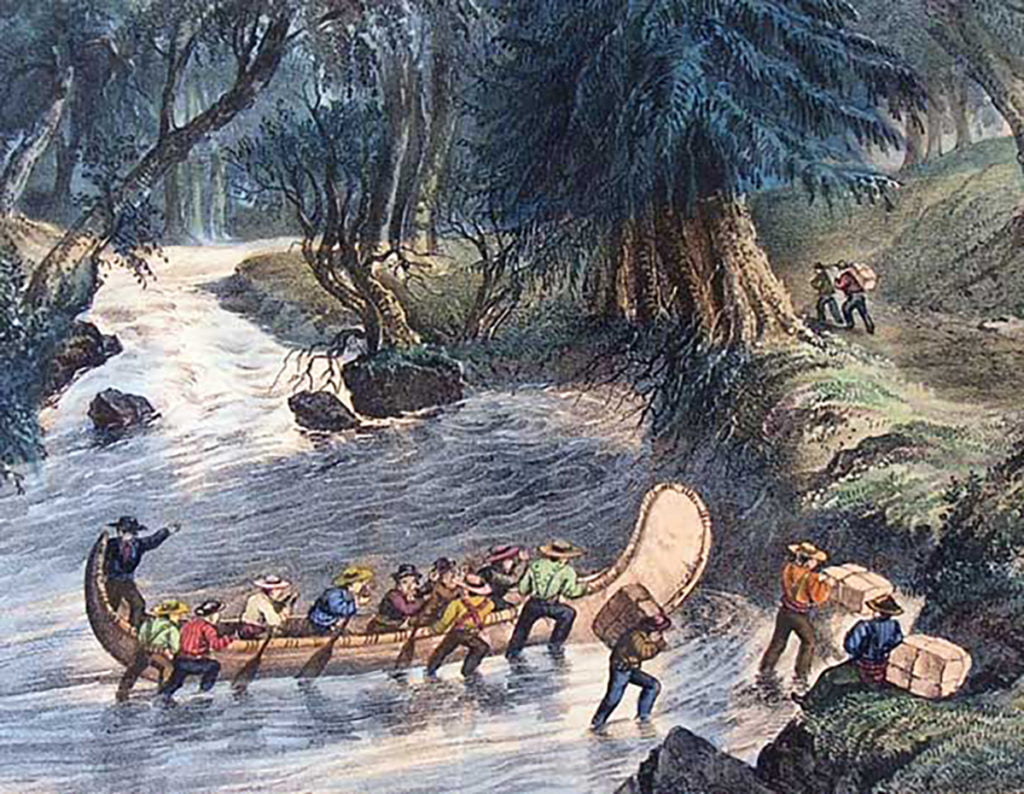 Portage: This is both the trail connecting bodies of water across which bales of trade goods were toted as well as the work of carrying. Portaging was the most-hated part of the voyage, because each man had to carry those bales — two at a time — on his own back, whereas paddling meant sharing the four-ton load. Up to four men were needed to portage the 35-foot Montreal canoe.

Pièce: Each bale of trade goods was called a pièce and weighed about 90 pounds. Montreal canoes heading from Lachine to the rendezvous carried 60-65 pièces; North canoes leaving from the rendezvous for distant fur posts carried 25-35. Heavy trade goods like shot or gunpowder were packed in barrels or distributed among the pièces; bulky items like guns were more complicated.

Each voyageur was responsible for 6 pieces (bales) of cargo, and miscellaneous items. A tumpline, also called a portage collar, allowed him to carry the weight on his back more efficiently.

And here’s the second unusual measure — of portages:
Posé: (pause) First say these two words aloud — hear their similarity? Here’s the method of portaging: After the first third- to half-mile, a voyageur would drop his pièces, or dePOSit them. (After hauling 180 pounds, the way back probably felt like a vacation.) He’d head back for his second load of pieces and dePOSit them at the same location, now called a posé/pause, and return for his third load.  All cargo was brought to the same posé/pause before going the next half-mile, which better organized their goods instead of scattering them along the trail whenever someone got tired.

So the number of posés on a portage indicates its length. Like a pipe, a posé/pause roughly measures distance. However, the more difficult the portage, the more posés/pauses. A person who can read land well can find the locations of the posés on old portage trails.

At sunset, they pulled into a campsite, unloaded their cargo and provisions. For the 10-12 men in a Montreal canoe (canot du maître), that included 600 pounds of biscuit, 200 pounds of pork fat (also called grease) and 3 bushels of peas. One man per canoe was designated the cook (for which he received more pay). 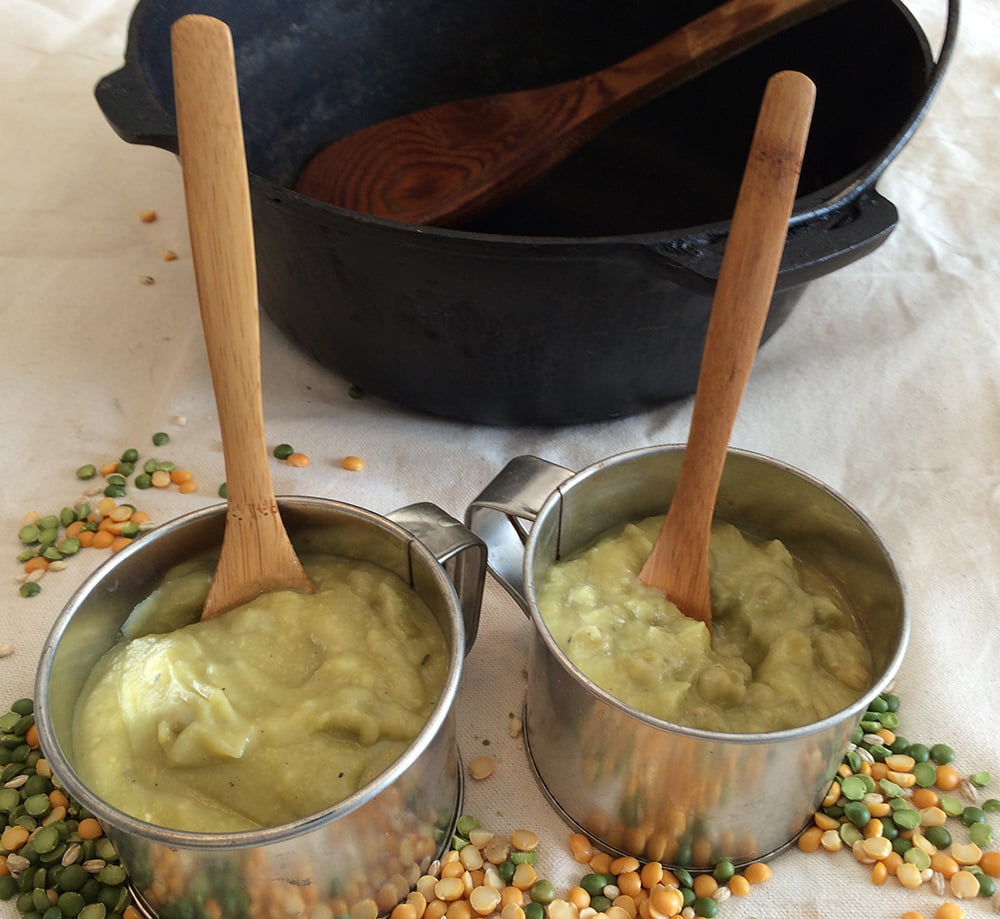 Every meal for 6 weeks was pea soup–breakfast and supper. They were glad for pemmican and rubbaboo when they could get it.

Pea soup (pottage): The same meal twice a day every day for four to six weeks. Here’s the recipe: “Fill a large pot with river/lake water and add one quart of dried peas per man. Simmer until they are well bursted, stirring as needed. Add two or three pounds of pork fat for flavor. Four crumbled biscuits will thicken it. The mixture is ready to eat when a stick or paddle stands straight up.” Half of the pottage was eaten at supper, with the remainder saved for mid-morning. That way they’d have an empty kettle to portage.

Pork-eaters: This (derisive) nickname was given to voyageurs who paddled from Lachine to the rendezvous and back in a season, provisioned by the Company to speed their journey. Winterers (the Northmen who signed on for five-year contracts) didn’t get such luxury, and had to find or trade for all foodstuffs. When the tribes were hungry, so were the winterers. They starved more often, and scorned the pork-eaters.

Pea soup was on the menu until they arrived at Sault Ste. Marie, where they could trade for corn and pemmican.

Pemmican: Pemmican, developed by various tribes of Native Americans, is the original fast food. Packaged in 90-pound bags, it was portable and lasted for a long time. And it could be served several ways — sliced off the block and eaten raw, chopped and fried or chopped into little pieces and added to hot water to make a soup called rubbaboo. To make pemmican, the First Americans cut and smoke-dried the long muscles of buffalo, bear, deer or moose and pounded the meat to a powder. They added an equal amount of animal fat and packed it in a bag, and mixed in dried berries. Then a white hard fat was poured over it all to preserve it. 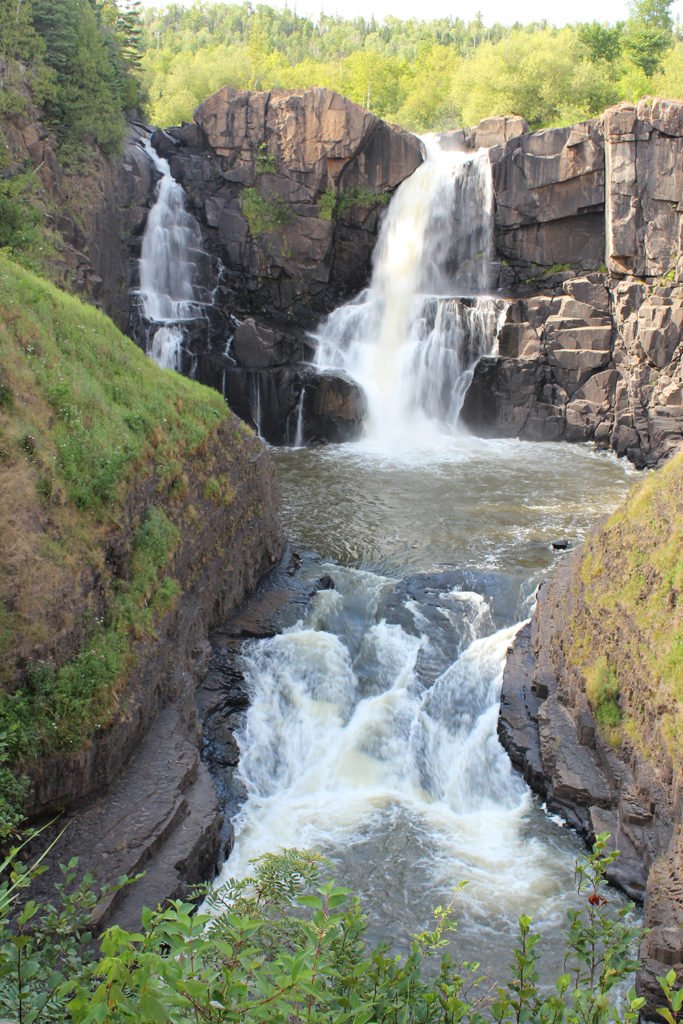 High Falls on the Pigeon River. It’s clear why they needed to use the Grand Portage.

Pigeon River: This river was part of a navigable voyageur “road” along a series of lakes that form the border between Minnesota and Ontario into Lake Superior. However, the last miles were riddled with non-navigable waterfalls. So the Ojibwe created a portage around them, called Grand Portage. It’s nearly nine miles, with a vertical drop of more than 630 feet. A rendezvous was held at this site for many years. Northmen only had to carry their personal baggage across whereas pork-eaters were under contract to carry eight pièces of the Northmen’s pelts eastward or trade goods for the Northmen toward Fort Charlotte. If they opted for extra duty, their contract specified “one Spanish dollar” for each additional pièce.

Pays d’en haut: This is the word for the upper country, the great North American wilderness, where fur traders built far-flung posts to trade with the Aboriginals. The voyageurs needed to establish relationships, procure food and collect furs — and get themselves and the pelts back to the rendezvous. Voyageurs also actively traded in the pays des Illinois. 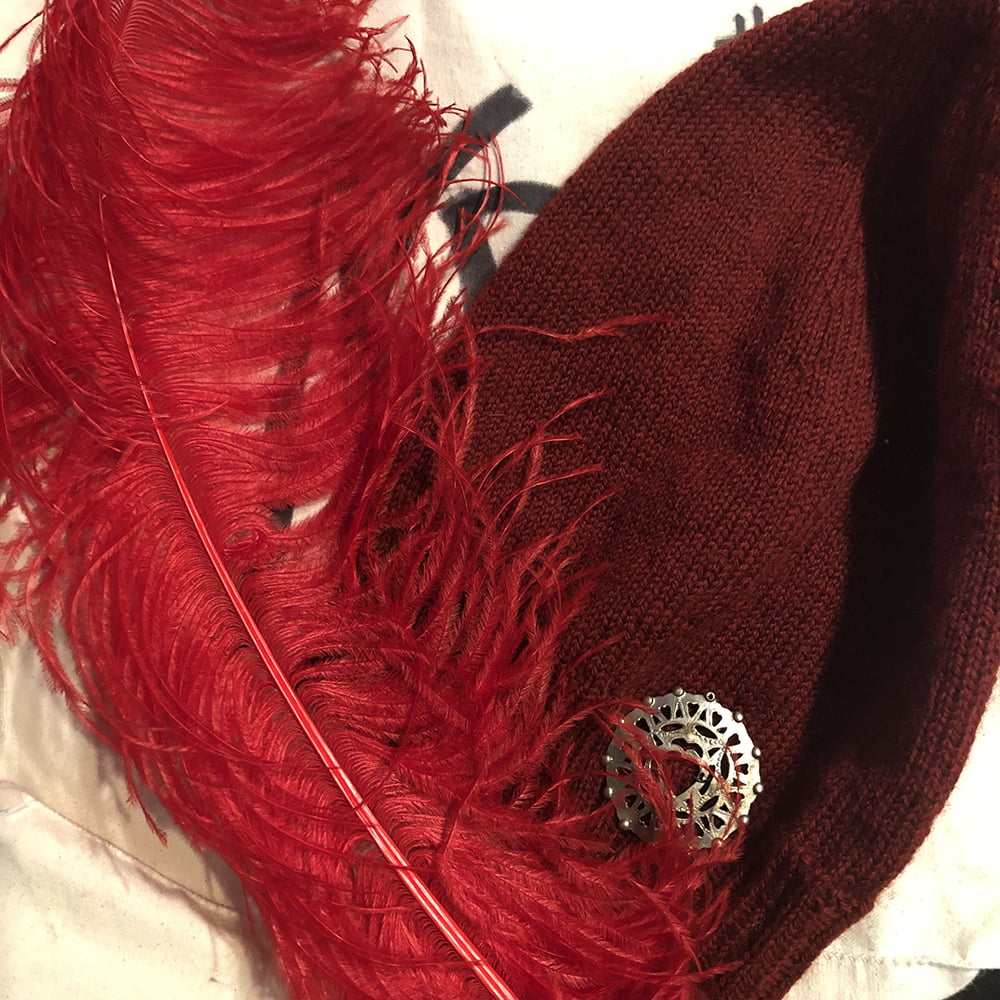 A voyageur who wintered earned the right to wear a plume in his cap!

Plume: A plume, often a red ostrich feather, adorned a winterer’s knitted cap, his tuque. The message was: “I am a northman, a true voyageur! I have wintered, suffered, and now I am one of this corps.” What panache!

Pelts: Beaver was the preferred pelt, in its prime in winter, when it was thicker. Interestingly, since hatmakers needed to pluck out the long glossy guard hairs to get at the fuzzy underhair for the best hats, they preferred “used” beaver fur. Having been worn or used as blankets for a season removed guard hairs naturally. 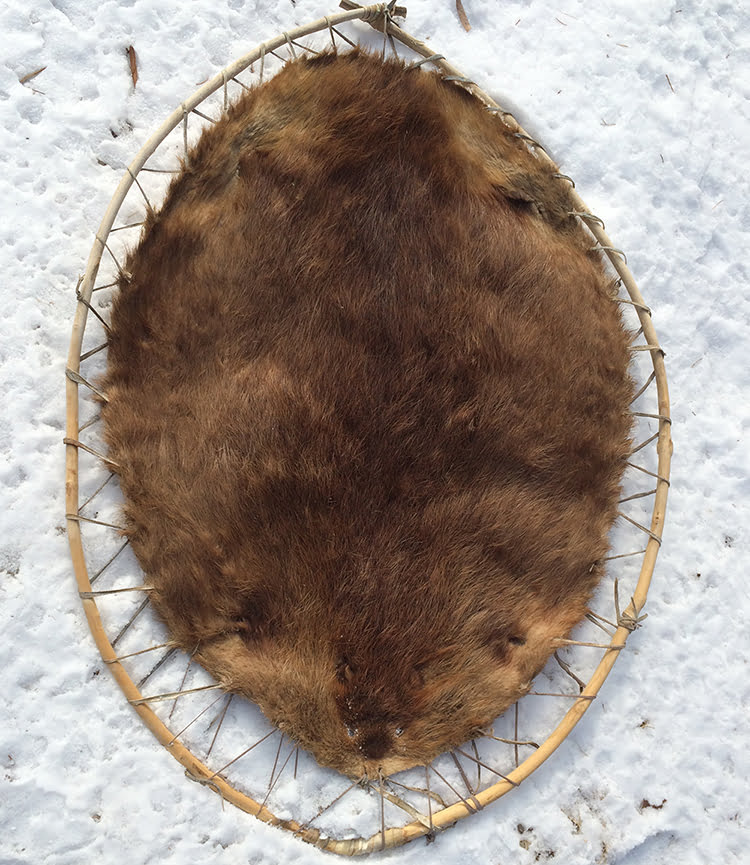 A beaver pelt, hooped for skinning and drying.

Plus (or plew): A prime beaver skin, which was used as a standard unit of value in the fur trade. In the pays d’en haut, a plus or (plew) became the “currency” or money. In the early 1700s, a plus of beaver was worth: one bear pelt, or one otter skin, or two foxes, or four martins, or four seals, or eight minks, or four bobcat skins. One moose hide was equal to two beavers.

After European demand forced the Native Americans to overhunt and depopulate the fur-bearers, the hat makers discovered silk. The bottom fell out of the beaver hat market in the 1850s.

Re-enactors at Grand Portage rendezvous show the styles worn by the bourgeois (partners).

Partner: The North West Company combined many smaller fur trade companies. Originally an investor who’d wintered was eligible to become a NWC partner. Over the years, it required more years living in the interior, and that method of amassing wealth disappeared. The partners, also known as the bourgeois, formed a powerful, rich group that supported the fur trade.The NWC’s motto was “Perseverance“ (which maybe could have been the 18th P word). The Hudson’s Bay Company didn’t have an upward track for men who were willing to donate years of their lives in remote places in exchange for company wealth. 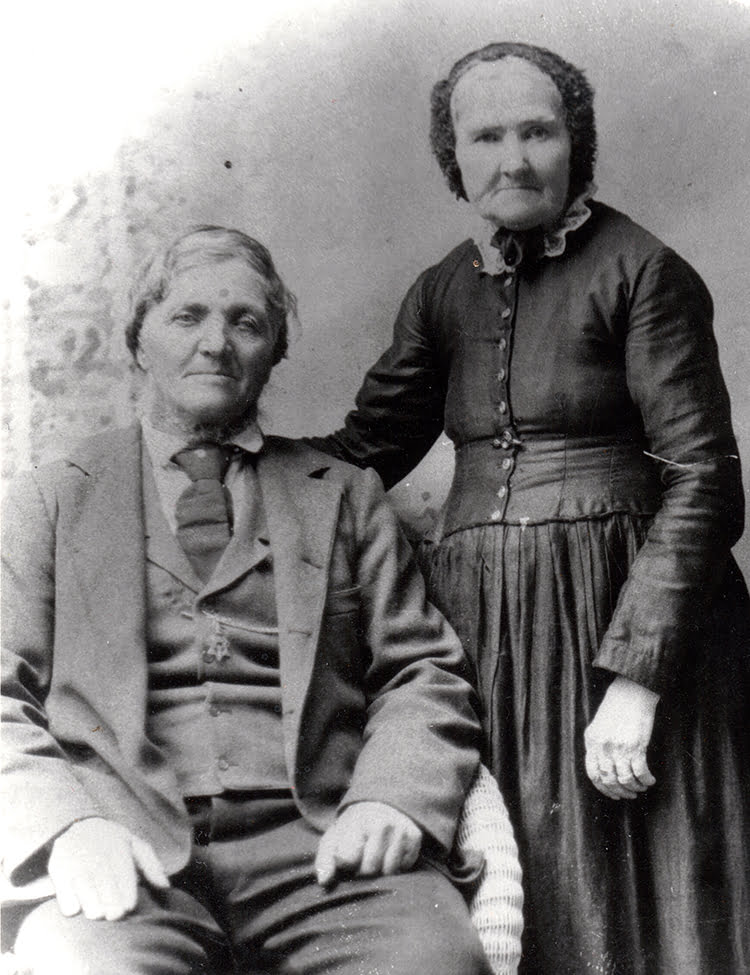 My voyageur ancestors included Pelletiers. You can check a free online source to see if your ancestors signed voyageur contracts.

Pelletier and Peloquin: These are two of the surnames of my ancestors who paddled in fur brigades. I’ve found quite a few contracts for Pelletiers, not so many Peloquins. In considering the various spellings of Pelletier, I wonder if those family members had special skills or focused effort in working with furs, as “pelt-iers.”