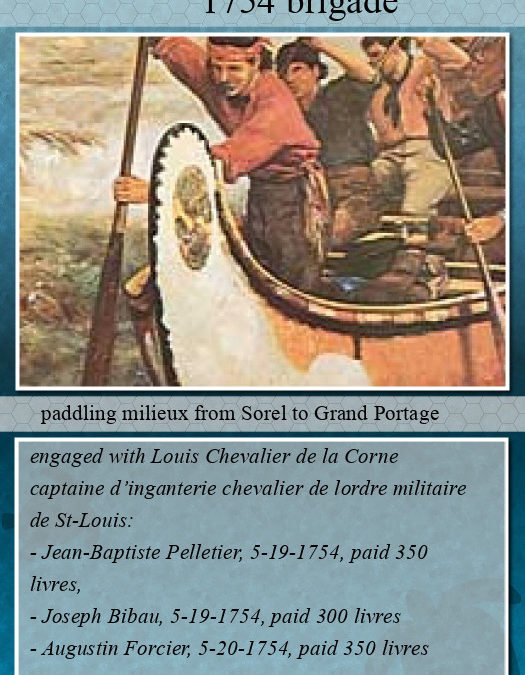 I’m having way too much fun finding about voyageur contracts. Look what history you can piece together from these contracts.* These are possible ancestors, all from Sorel. To illustrate the available info, I’ve created voyageur trading cards with some of their stats, like baseball cards. 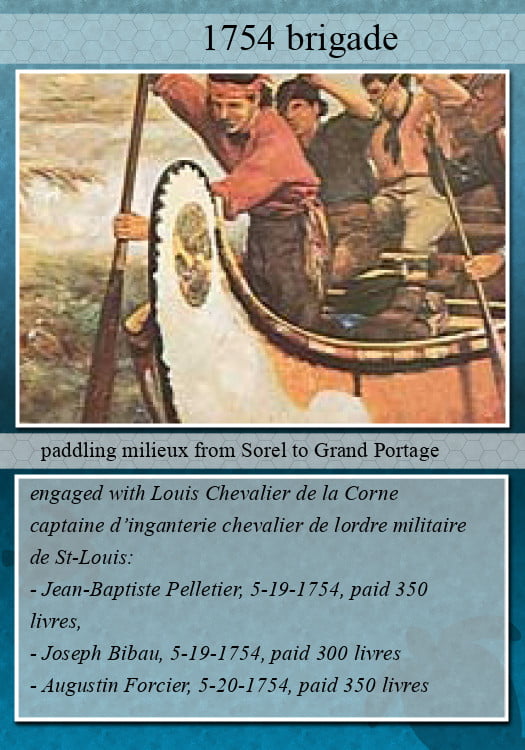 The same Louis Chevalier company signs a different Sorel trio of pork-eaters the next year.
Jean-Baptiste Pelletier and Joseph Bibau sign May 19, 1754, right before the brigade leaves. Their destination is Grand Portage. They earn 350 and 300 livres respectively.
Their pal, Augustin Forcier, signs the following day, May 20, and earns 350 livres. Why the extra money—a signing bonus because they desperately needed more paddlers? Maybe he was the cook? Or the singer? I will never know.

3 PIERRE PELTIERS in one brigade! 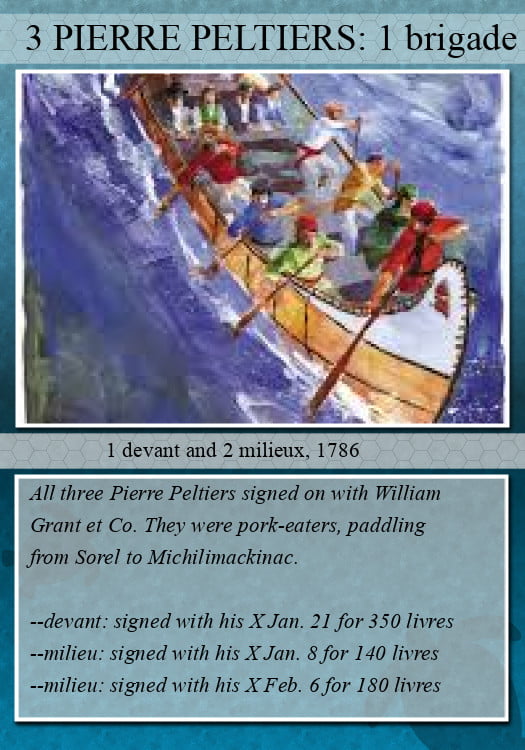 Pierre was a popular name fr Peltiers that year. Here are three Sorel men who signed X to contracts the same year, 1786, with the William Grant et Co. All bound for Michilimackinac. I bet they were in the same canoe, with one a devant (bowman) and two as milieux (middlemen paddlers).

*Back in 2018, after I discovered a searchable website listing about 35,000 voyageur contracts , I wrote a blog post (Nov. 30) which included a few tips. I gathered a great deal of info with last names and the parish or town that a person may have left from. Wish they had asked the ages of the voyageurs at that time, but it wasn’t part of their contracts. 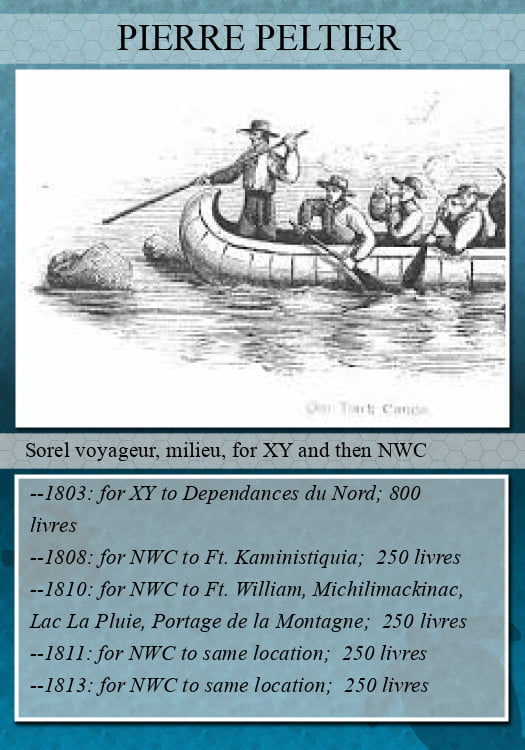 For this Pierre Peltier,  we can find 5 contracts.

He was first engaged by Alexander Mackenzie.
In case you were sick that day your class discussed Mackenzie, he’s famous for having explored the Arctic (like the Mackenzie River) while working for the North West Company. But life under Simon McTavish, the head of the NWC, didn’t suit Mackenzie and he joined the rival XY Company. Then McTavish died. The NWC and XY companies merged within a half year.

Back to Pierre Peltier: he signed with Mackenzie in 1803. Pierre didn’t sign any more contracts until 1808. Was that a five-year term? Possible. He earned 800 livres as a milieu (middleman in the canoe).
His next contract, in 1808, was for 250 livres with McTavish, McGillivrays & Co, John Ogilvy et Thomas Thain, And the next contracts (1810, 1811, 1813) were also with McTavish, et al.
Though a veteran by the last contract in 1813, his pay for each of those McTavish contracts stayed at 250 livres and he remained a milieu. He usually took an advance of 8 piastres upon signing and an additional 4 piastres on departure. Each contract was signed with his X. 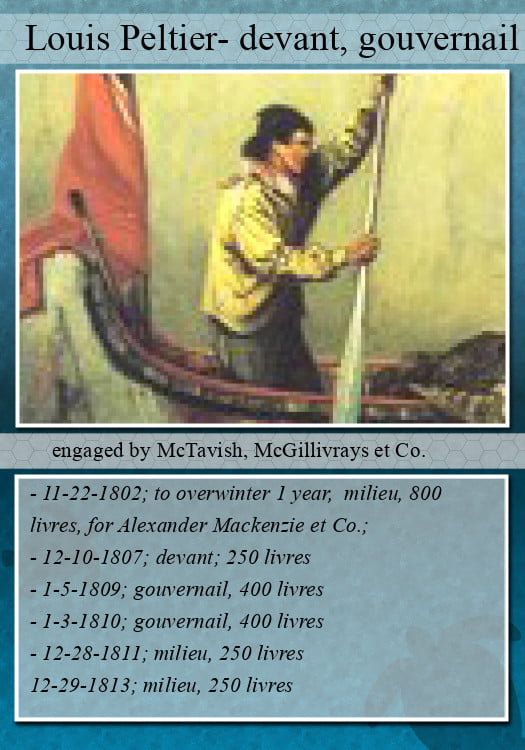 Louis Peltier‘s voyageur career somewhat parallels Pierre’s: They both started with Alexander Mackenzie et Compagnie, though Louis begins service in 1802, for 800 livres as a milieu. He overwinters (Fort des Prairies, Rivière Rouge, Michilimackinac and Grand Portage). As they all do, he signs with his X mark. And it’s noted that he’s the son (fils) de Jean Peltier. He signs November 22, 1802.

There’s a gap, until 1807. Now he’s engaged to McTavish, McGillivrays & Co., (because they’ve merged with Mackenzie, and NWC rules!). He signs December 10. Though he’s a devant (bowman, with serious responsibility) by now, his wages have dropped to 250 livres, with 10 piastres taken on signing and an additional 4 piastres on departure. Is the drop in wages because of the merger, that competition drove up wages and the lack of competition returns them to normal?

Louis moves up—or back, I should say. He becomes gouvernail (steersman) in his next two contracts, 1809 and 1810, which he signs January 5 and January 3 respectively. A pork-eater, he paddles to Ft. Kaministiquia (Thunder Bay to us), Michilimackinac, Lac La Pluie (Rainy Lake) and Portage de la Montagne. For which he earns 400 livres on each contract.
Perhaps he has debts, or needs to make payments on land — he opts to draw 100 livres at signing the first year, and 30 livres the second year. And on the departure, he draws an additional 8 piastres and 12 livres, correspondingly, for a little pocket money perhaps. But 12 livres?? That seems like a big chunk of wages. Did he have a special purchase in mind? Gambling debts? Doctoring costs? Hmmm.
Then, he signs on twice more, as a milieu for the same location. He signs these contracts December 28, 1811, and December 29, 1813. His earnings go down accordingly to 250 livres, drawing 8 piastres at signing and 4 at departure. Same Louis with less responsibility? Or different Louis? This one signed his contracts in January,  the 5th or the 3rd, respectively.
Because there are at least 2 Louis Peltiers. Another one signs his contract September 1, 1813.