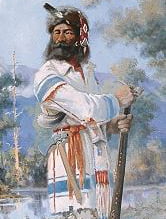 Over the years I’ve really disliked Toussaint Charbonneau, the husband of Sacagawea who happened to be a French-Canadian fur trader. (Which has become very interesting to me!)

My negative beliefs about Charbonneau came from Elliot Coues, who thoroughly vilified him when editing the journals of Meriwether Lewis and William Clark in 1893 — nearly 90 years after the Corps of Discovery trekked across the new land the USA had purchased. 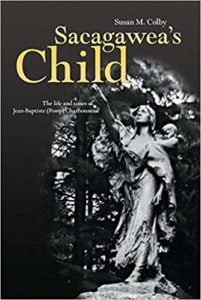 Sacagawea’s Child: The Life and Times of Jean-Baptiste (Pomp) Charbonneau

But I recently read “Sacajawea’s Child: The Life and Times of Jean-Baptiste (Pomp) Charbonneau” by Susan M. Colby, and came to a gentler sense of who he was. Here’s what I’ve learned:

Charbonneau was recruited by L&C as an interpreter for Corps of Discovery in 1804-06. The language translation chain started with:

According to Discovering Lewis & Clark, he was paid $818.32* for his work. Most privates earned $333.33 for their 33 months of service. *Charbonneau might have received $818.32, while the other civilian, George Drouillard, earned $1,666.66. (Barbara Fifer believes Charbonneau was paid $500.33. See Wikipedia.)
On the expedition, he also worked as a cook, boatman and negotiator for horses and supplies.

Elliot Coues wrote, “On most occasions, Captain Clark showed himself possessed of rare judgment and fortitude. Today, however, he was not up to the mark, and the cowardly wife-beating tenderfoot still lived.”

Cowardly wife-beating tenderfoot? Ouch! Is any of that true? No.
Starting backwards, with “tenderfoot:”

Toussaint was a trader who’d grown up knowing the business. His great-grandfather began trading in 1688. Toussaint signed a three-year contract in 1793 to winter on the Assiniboine River in Manitoba for the North West Company. In 1803 he and Alexander Henry the Younger co-managed Fort Pembina (switched alliances to American Fur Company), having worked up from engagé to interpreter to trader to fort manager. His salary then was £300-400 per year.
By 1804 he’d settled into a Hidatsa village as an interpreter. He would not have been tolerated by the tribe if he wasn’t a friend and an asset.
After 11 years in the business, he wasn’t a tenderfoot. Interestingly, Coues had no woods experience, but he was bitingly judgmental about Toussaint, who had. 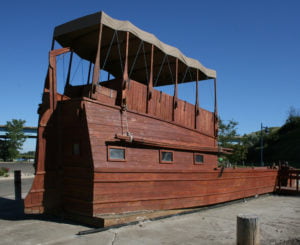 Lewis and Clark’s keelboat, which was 55 feet and needed a crew of 27, is much larger than the red pirogue, 41 feet long with a crew of 8.

When Reuben Gold Thwaites edited the journals in 1904, Toussaint was twice identified as a “coward”:

Wife-beater?
The charge of wife-beater came through Clark, who rebuked him for striking Sacajawea (August. 15, 1805). To his credit, Toussaint did not repeat the behavior.

However there was an earlier incident in his life, reported in John Macdonell’s fur trading journal (May 30, 1795):

“Tousst. Charbonneau was stabbed at the Manitou-a-banc end of the Portage la Prairie, Manitoba, in t act of committing a Rape upon her Daughter by an old Saultier woman with a Canoe Awl — a fate he highly deserved for his brutality — It was with difficulty he could walk back over the portage.”

Detail from “Lewis and Clark at Three Forks” by Edgar S. Paxson, 1912. The original hangs in the Montana Capitol Lobby (courtesy of Wiki Commons)

His other qualities?
In “Sacajawea,” Harold P. Howard described him as “short, swarthy, bearded, talkative, perhaps boastful.” The first three are purely speculation — there are no known likenesses of him by painters.
Howard might be right about “talkative and boastful” — voyageurs weren’t shy in discussion their feats of daring.
But at a later time, Toussaint apologized to Prince Maximilian for not speaking Hidatsa correctly, though he’d lived with the tribes for many years.

Lazy?
Not. When Charbonneau was assigned to stand guard and help with manual labor, he quit the expedition — those tasks weren’t in his job description as interpreter. Maybe he saw everyone else pitching in, or maybe there was pressure, but a week later, he apologized and was reinstated. Both wives originally were slotted to go, but Otter Woman, his first wife, did not accompany the Corps. Only the new mother, Sacagawea. Who did not get paid for her work.

Impulsive, unlettered, violent, opportunistic?
Possibly. There is no known record. But on the other side, he was valued by Captain William Clark who encouraged the Charbonneaus to resettle in St. Louis, where Clark became the godfather and mentor of their children, and offered work to Toussaint.
Maybe because the British and French long had despised each other. The prejudice against “French-Indians”was active 50 years later.

Organize a mini-book club — contact me for a reduced rate on multiple copies of “Waters Like the Sky” or “ Treacherous Waters.”
Invite me to present at your group — I’m happy to tailor a program to your needs, youth to adult.
Recommend me to your local school: I’m glad to visit (in costume) to share lore and realia and fun. Middle school-ers study state history; older students are interested in the research and writing process.
Inform me — about a rendezvous in your area or a resource/book I should know about.
Buy a either “Waters Like the Sky” or “Treacherous Waters” as a gift. I’ll inscribe it just as you instruct.

What else I’m currently reading:
“A Toast to the Fur Trade: A Picture Essay on its Material Culture” by Robert Wheeler
“The Conquest of the Great Northwest” by Agnes Laut