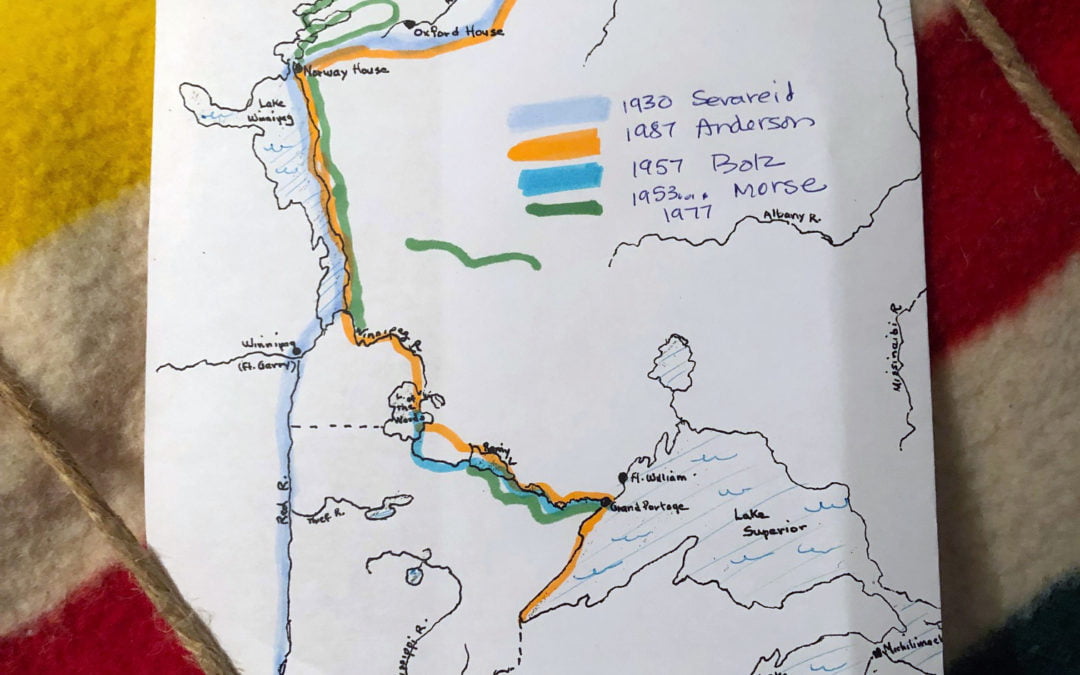 Looking for summer reading? Here are four stories of adventure in the northern woods and waters. The voyage changed the lives of the young canoeists — and the others had been hoping for years to make this trek.

I paddled only a few times in the Boundary Waters or on river canoe trips and am inspired by the modern accounts of others who navigated rough rapids and many décharges — and succeeded at impressive plunges. In reading these accounts, I paddled the rapids vicariously.

The clerks and wintering partners of the 1700s and 1800s who wrote journals of the early days of the fur trade — of paddling harrowing rivers, icy lakes, deep forests. They whetted our interest. They’ve inspired many others, like these four writers who read those journals and were drawn to make their own trips and see the same places. All four detailed their adventures in memorable prose. Each story is as different as the journey they experienced — you’ll enjoy them all.

“Canoeing with the Cree” by Eric Sevareid 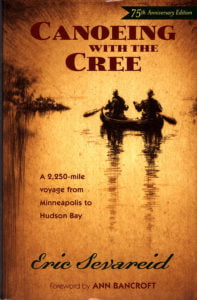 Two urban teens make an epic journey from Minneapolis to Hudson Bay in 1930.

On June 17, 1930, shortly after high school graduation, Eric Sevareid and Walter Port, novices without woods experience, paddled from Minneapolis, along the Minnesota River, the Red, the Winnipeg and Lake Winnipeg and on to Gods River and York Factory of Hudson Bay — 2,250 miles. Their grub box included canned soup, canned beans and canned pineapple, saved for one of their last meals.
To finance this unprecedented trip, they sold their story to the Minneapolis Star newspaper and wrote accounts along the way. Most people they met advised them the trip couldn’t be done, especially so late in the year. Starting slow, and doctoring 11 days in Fargo, the trek took them four months. They were the first ever to enter Canada at the customs office in Emerson, Manitoba, by canoe.
Facing harrowing experiences, the pair arrived at their destination later than expected, so Sevareid’s friend had to give up a $1,500 college scholarship to a college in Chicago — only to hear that another college found their experience extraordinary enough to offer its own scholarship. 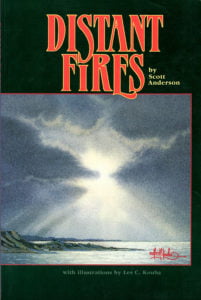 Inspired by Sevareid and their own woods experience, two young men paddle from Duluth to Hudson Bay in 1987.

At age 16, Scott Anderson read Sevareid’s book, and knew he’d make a similar trip. In 1987, when he’d completed his junior year in college, he and a friend replicated part of it, but made the wilderness experience their own, 1,700 miles in all. Because they lived in Duluth, they started in Duluth, and paddled Lake Superior. But due to bad weather and winds, it took them five days to leave the city’s limits.
They carried much of their gear (but not the tent) over the Grand Portage and paddled through the Quetico to Rainy Lake. Once Lake Winnipeg, they followed Sevareid’s route, including Gods River, which they were advised against.
His irreverent telling describes moments that were often nearly disastrous, but funny — Anderson tells their story with a self-deprecating wit. I laughed out loud many times, hearing of their canoe packing skills and cooking prowess, the mayflies (fishflies) and dams.
Techniques they relied on: backpaddling in a rapids (instead of speeding up) and using the headwind to guide them through the maze of Rainy Lake’s islands.

“Portage into the Past: By Canoe Along the Minnesota-Ontario Boundary Waters” by J. Anthony Bolz 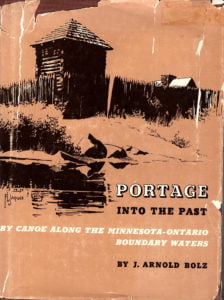 Inspired by the first journal writers’ records of the Boundary Waters area, Bolz, his wife Belva and his friend Harvi traced the voyageurs’ highway in 1958. Taking 11 October days, they started by portaging the nearly-nine-mile Grand Portage, and paddling and portaging the Pigeon River, and the lakes Rose, Cypress, Basswood, Crooked, Lac La Croix to Namakan.
Preparations included copying out sections from old journals of 150-200 years earlier. Nightly they’d read about the descriptions of the days and travails of La Vérendrye, Alexander Henry the elder, Macdonnell, Bigsby, Owen, Thompson, Tanner, Delafield, Mackenzie, whatever was relevant to the portion of the map they would traverse the next day.
In addition to the thorough recounting of history, this lyrical version deeply appreciates the beauty of what they observed along the way — moose tracks, ruffled grouse, fragrant balsam, bright sunrise, Vs of geese, fissured cliffs with mantles of lichen, slaps of beaver tails, billowing clouds, frost-tinged autumn trees.

“Freshwater Saga: Memoirs of a Lifetime of Wilderness Canoeing in Canada” by Eric W. Morse 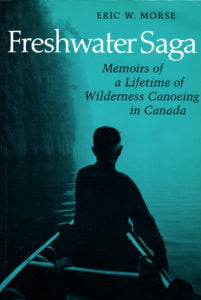 A writer and his friends canoe many Canadian waterways, some old fur trade routes, over 20+ years.

Eric Morse, national director of Canadian Clubs, loved the wilderness and, with his wife Pam and friends, found ways to appreciate it by camping and paddling. For many years, they traced the routes of voyageurs and early fur traders and then described those routes — in their current condition — in “The Fur Trade Routes of Canada/Then and Now” (Ottawa, Ontario, Canada, 1968, Queen’s Printer).
Morse wanted to experience even more of Canada’s wilderness., so for about 20 years, with his wife and friends, he made unique voyages on wilderness rivers. This book details those difficult but amazing trips.
At that time, Hudson’s Bay Company delivered canoes to remote landings. They’d paddle their canoes along various rivers and leave them at a different landing for the HBC post to retrieve at a later time.
During one of his first ventures, from York Factory to Hudson Bay, Morse noted that the Indians they met felt pity for the unfortunate whites paddling canoes and almost took up a collection because they were too poor to afford a motor.
On the Mackenzie River which has a very vast current, they used the “bucket trick” to counteract a strong contrary wind: they tied an empty bucket to the bow. The current, stronger than the wind, filled the bucket and pulled the canoe forward into the wind that made it unnecessary to paddle. 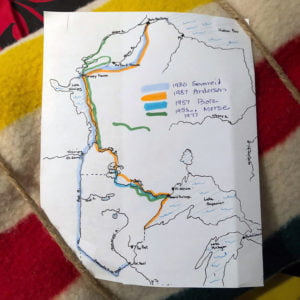