After five weeks traveling in 1793, John Macdonell and two others arrive at Michilimackinac, where they spend a companionable day or so. Then they hustle on to the rendezvous where important company decisions are being made. His journal continues, the fifth part in the series. 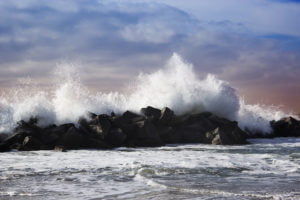 The brigade faces all kinds of weather.

July 2 ~ We left the hospitable roof of Monsieur Nolin who escorted us to the western end of the portage where we pitched our tent and finished the Madeira that remained in our care with him. Lemoine remains here to shift for himself—stopped at Point aux Pins where two leagues above the sault we found Mr. Nelson building a vessel for the Northwest Company to navigate Lake Superior, to be called the Otter. She is to be launched shortly. Left the Point aux Pins at 4 p.m. with a fair wind which soon brought us opposite to the Gros Cap after which we entered the great Lake Superior, the mother and mistress of the other lakes. The water is so green and transparent that I am confidently told the bottom can be seen in 30 fathoms water.

July 4 ~ We were prevented from stirring by stormy weather—a cold raw day.

July 5 ~ Passed the Bay of Michipicoton where the Northwest Company has a trading post. The bay shores run parallel that the head wind we had upon one side was aft-wind on the other side of it for the space of 10 leagues. We made, by the men’s compute, 24 leagues this day. 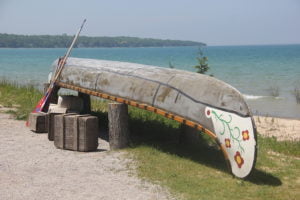 A voyageur canoe turned upside down.

~ We passed Tête a la Loutre where a column of rock stands upon a lofty round mountain. About 15 leagues further we found the entrance of the Pic River and a trading post of Mr. Coté, about half a mile from our encampment. This was the coldest night ever I felt at this time of year. In the vicinity were 11 crosses, erected for men who perished last winter. We kept our arms in good order every since we parted from canoes being told that Indians are apt to attack a single canoe. The crews seldom have any arms of their own. We met a canoe of Forsyth Richardson & Co. that had wintered in Nipigon alongside a Hudson’s Bay Co. trader who did not make a single pack [bale of furs]. Their chief had frozen to death seeking subsistence for himself and fellow sufferers. This canoe was loaded with the same goods they took into the interior last autumn. 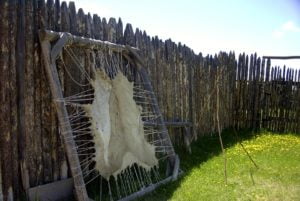 ~ We passed the Nipigon River and saw two round mountains in the form of sugar loaves. We passed Bay Noir, so deep the eye cannot see the bottom. We passed close to Thunder Mountain, one of the highest; one half rises about 45 degrees from the water’s edge and is topped off by the other half a perfect perpendicular. It resembles an extensive citadel wall. There is another curious round mountain upon an island. We paddled against a strong hard wind till we reached Point au Pêre where we passed the night. Tradition says it had its name from a Pêre Jesuite who was murdered here. Mr. McLeod and I shaved and shifted being the last night we shall sleep out, wind and weather permitting, this side of Grand Portage.

~ Leaving Point au Pêre, we paddled 2 pipes and put to shore to give the men time to clean themselves while we breakfasted—this done a short pipe brought us to Pointe au Chapeaux around which we got a sight of the long-wished-for Grand Portage. The beach was covered with spectators to see us arrive, our canoe went well and the crew sung paddling songs in a vociferous manner.

Macdonell, age 25, spent the rest of July at Grand Portage transacting the company’s business as a clerk. On Aug. 5, 1793,  he became a Northman, leaving with trade goods for his wintering post, and arrived there Oct. 8 northwest of Lake Winnipeg on the Qu’appelle River—an additional 52 portages. In 1797 he became a wintering partner, and for the next 15 years was stationed in Athabasca, Isle a la Crosse and Lesser Slave Lake. His journal includes those experiences.

John Macdonell’s journal of the entire voyage is included in “Five Fur Traders of the Northwest” (Minnesota Historical Society, 1965). This diary and another which continues his recollections through 1795 are owned by McGill University of Montreal, Quebec, Canada.