John Macdonell has been traveling for a month with his first-ever canoe brigade, in 1793. This is the fourth of 5 parts. 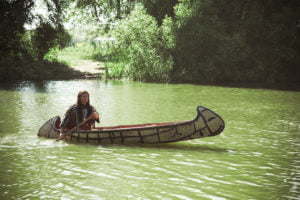 North American Indians use smaller canoes than the brigades.

June 24 ~ Left the Prairie des Vases and crossed a large bay of Lake Nipissing. I have been informed it is so shallow that they spear fish in winter under the ice not exceeding 3-4 fathoms. The water is grayish and muddy. In the center of the lake is Point aux Croix on which 11 crosses are erected, men who were swallowed up with canoe and cargo some years ago. Beyond this point we met an Indian and two little girls in a small birch bark canoe to whom we gave some biscuit in exchange for fish.

~ [Finally they will travel downstream!] At the Chaudiere des Français, we carry from Lake Nipissing to a deep stillwater cove of the French River, which issues out to Lake Huron by a variety of channels and are too rapidious to be navigable, if they are to be judged by the one nearest which is steeper than a mill race and not wider in places. After proceeding about 2 miles down the cove from Lake Nipissing, the current of the main body of the French River took us broadside and carried us down merrily, being the first current able to make an impression on the canoe that we have drifted with. 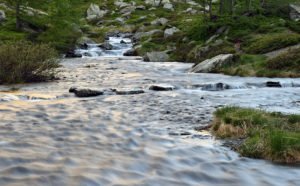 Paddling downstream is fast and dangerous.

June 26 ~ Came down the following rapids: Les Pins, Rapide Croche, La Fausille, Le Parisien, Le Petit Parisien. The day is a beautiful clear day with sunshine. Fourteen leagues from here is L’Enfant Perdu. The story is that an Indian child was bathing in sight of his parents and was suddenly pulled under water. His friends repeatedly dived for him, but to no purpose. Later they heard moaning under the ground and began to dig with sticks and paddles, but gave up when the cries were under high rocky ground. It is said the boy’s cries were heard for 6 days.

~ A league below is the Grand Recolet Portage. Here one of the North West Company’s canoes manned by the Majeau brothers was upset and lost half the cargo about 15 days ago. They had made portage and loaded the canoe below the portage but neglected to put a man on shore with a line to stem the strong eddy which carries back to the falls. In consequence it was drawn down by the eddy under the falls and was instantly filled and sunk. The few survivors and the goods that floated were picked up below the rapid by other canoes of the brigade. Seven crosses are erected here, as well as seven others of former casualties. 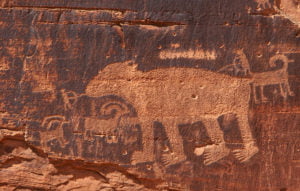 ~ Two leagues below is Derreaud’s Rapid, named for a voyageur who broke his canoe in it. There are various figures of animals etc. made on the face of the steep rocks in many places along the banks. Some leagues below Derreaud’s is the figure of a man standing over an animal that lays under him with a sun on one side and a moon on the other. Farther on are at least 16 figures of different animals standing promiscuously together on the face of a steep rock. Amongst them are fish, flesh and tortoise, all painted with red paint. Two leagues below is the figure of an ox, which gives name to a fine view of the river, Lac du Boeuf. The figures are made by scratching the rockweed [moss] off.

~ Passing through a narrow race of a rapids named the Dalles, we saw an island. There the Iroquois about 50 years ago tried to cut off a strong brigade of trading canoes. They abandoned their ambush and the canoes pursued their route. It was among the last attempts of the Iroquois. It is strange that the Iroquois should have come so far out of their own territory to wage war.

June 27 ~ We came 25 leagues yesterday and today, the full length of the French River. We entered Lake Huron with a very strong head wind which compelled us to put ashore as soon as we found a suitable place to unload and haul up the canoes. The French enters Huron by a great number of branches separated by high rocky islands. The lake appears like an ocean. There are a few rocky shoals where natives find waterfowl eggs, baskets full which they brought to our tents for sale. They tried ways to make us give them rum but we were staunch in our refusal. Then they, much dissatisfied, vowed to conjure and cause the wind to blow with increased violence from the same quarter for 8 days. 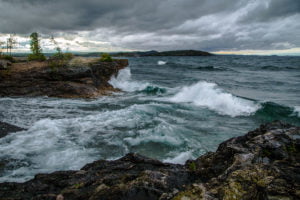 Waves crash as the horizon opens up.

From Lachine to Lake Huron there are 36 portages and as many décharges.

~ We lightened the guide’s canoe by 45 pieces [three-fourths of the cargo] and distributed them among the other canoes. We shipped all my effects and those of Archibald McLeod and Lemoine, and took a man out of each of the other canoes, which made us a crew of 14 paddles and set out. We set out on our journey leaving the rest of the brigade to wait the arrival of Dannis our associate guide whom we have not seen since the Long Sault. We are now a single canoe making the best of our way to Grand Portage. After proceeding 4 leagues, we put on shore for the evening.

June 28 ~ Being a fine sunshiny day we made good progress—next day we had a thick fog in which we were bewildered for some hours and camped at the Serpent’s Point, halfway to Sault Ste. Mary.

June 29 ~ Met a number of canoes coming from Michilimackinac and passed point Tessalon. We continue coasting the north shore of Lake Huron.

Source:
“Five Fur Traders of the Northwest,” edited by C.M. Gates. (Minnesota Historical Society, St. Paul, 1965).
Macdonell’s account began when he signed his contract on May 10, 1793. When they reached Lake Huron, At the end of June, Macdonell and two others moved to an express canoe, with more paddlers so as to travel as fast as possible to the rendezvous. The remaining crew will have to transport both cargoes. One more section of his journal will be published in this series.