John Macdonnell’s brigade is working their way upstream since May 25, 1793. It takes them about 3 weeks to reach the Mattawa River, a tributary off the Ottawa River, which they call the Grand River. Eventually they reach the height-of-land, and, with a big ceremony, toss out the long setting poles of the steersmen. The occasion is one for high wines. But the going is slow–narrow swampy passages. This is Part 3 of 5. 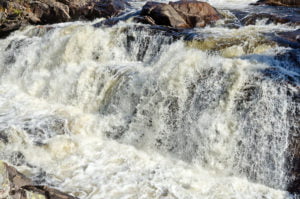 June 11 ~ The Roche Capitaine is the next portage we come to, a rough turbulent rapid. A league above it I saw the grave of poor Lalondes, the body that had been buried at St. Ann’s mentioned before.

[On waters with no current to fight, voyageurs can paddle about 4 miles per hour, up to a stroke per second, with 10-minute breaks to smoke their pipes every hour. But portaging, they can barely make a half-mile per hour. At a portage, they each make 3 trips, carrying 2 or even 3 packs of 90 pounds and additional loose pieces that don’t fit in a pack.

Oh, and they dog-trot. Their “rest” is that they don’t carry loads on their return trips. On some very short and very steep portages, they might use a “bucket brigade” system. No wonder they despised portaging. The décharges were probably not as hated as much.] 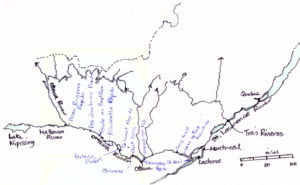 Portages along the Ottawa River

June 15 ~ Left the Grand River [Ottawa] at Mattawa in which we made 18 portages and as many décharges. Entered the little river which is so narrow that a good gun would carry shot from side to side. Mattawa means ‘a fork’ in the Algonquin or Nipissing tongue. A league upriver, we made the portage du Plain Champs, a considerable one where we spent the night. Here the brigade was separated so only 2 canoes traveled together, owing to the portages being frequent and only affording room for 2 canoes to unload at a time.

June 16 ~ We are going into a deep glen of still water 3 leagues long, very straight and from 300-400 paces wide, between 2 rocky mountains.

June 18 ~ We passed a cave called Porte de l’enfer [Hell’s Gate]; it is a cave that appears to be about 8 feet high. They say it receives light from the top and is spacious within. A mile farther we found the Paresseu Portage, a pretty long one; the rapid that occasions it has a perpendicular fall of 10 feet. It is the fifth portage on the Mattawa so far. At some portages a tree would bridge the river across. In 8 or 9 miles we come to the Anse aux Perches, where the setting poles are thrown away—a ceremony which our men performed with a loud huzza. They reserve two setting poles per canoe and will travel the rest of the way with paddles. 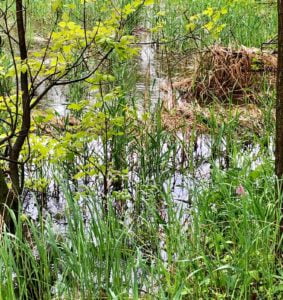 Finding their way through a swamp

~ The next impediment in navigating was the portage of Talon, a fall of nearly 40 feet in 2 cascades. The portage is long and difficult and we encamped and spent the night. About 3 leagues beyond we left the Mattawa and made 2 portages called Les Musiques. One of them is horrid, noting but ups and downs among broken and rugged rocks. We proceeded a quarter of a mile in a ditch not much wider than the canoe through the center of a cedar swamp. Then we embarked on a small lake which brought us to the Portage la Tortue. The Lac du Tortue is the source of the Little River [Mattawa]. The men compute the Mattawa to be 30 leagues. Lac du Tortue is much clearer water than the Little River. 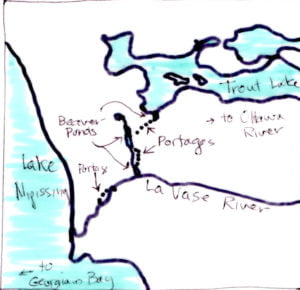 ~ Leaving Lac la Tortue, we have three portages running, called the Vases [meaning ‘muddy portages]. Here is the height-of-land [a continental divide]. We came to a small rivulet, so small that a man can in many places jump over it, which brought us to Lake Nipissing. The brook after the second portage of the Vases is about as big, sufficiently deep to float a loaded canoe. After the third Vase portage we entered Lake Nipissing, where we camped 4 nights without even shifting the place of our tent.

(After that effort, it’s no wonder they need 4 days to rest up. They need to be fresh for the roller-coaster ride on the French River, 75 miles downstream. His account continues in Part 4 of 5.)

Source:
John Macdonell’s journal of the entire voyage is included in “Five Fur Traders of the Northwest” (Minnesota Historical Society, St. Paul, 1965). This diary and another which continues his recollections through 1795 are owned by McGill University of Montreal, Quebec, Canada.