How to find ancestors who paddled on voyageur brigades—easily 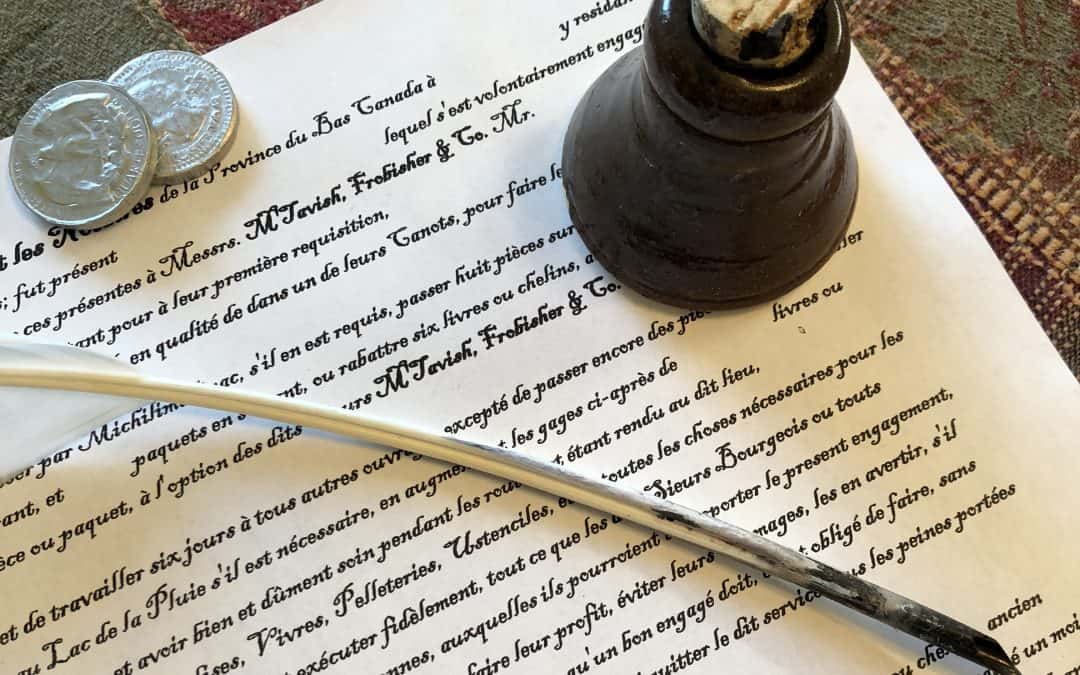 The tag on my website is “Nikki Rajala: writer, speaker, voyageur descendant.” So, who are those voyageurs I descended from?

More importantly for you, might there be voyageurs in your family tree?

Confession: I haven’t yet pored through microfilms of French-Canadian voyageur contracts written in spidery or faded handwriting. But, luckily, I don’t have to, and neither do you. 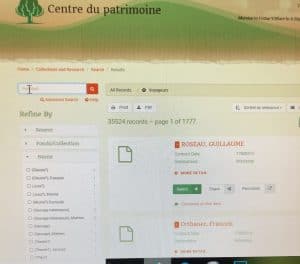 We can do it online! A Voyageur Contract Database from the Centre du Patrimoine in St. Boniface, Manitoba, Canada, has extracted information from 35,900 fur trade contracts signed in front of Montreal notaries between 1714 and 1830.

They’ve made it easy — they did the legwork for us. Merci beaucoup!

The information is nicely summarized and easy to use. I’m enjoying learning more precisely what my ancestors did. Besides it’s addicting.

The “Peloquin” name listed 20 references — manageable. They listed 93 records of Pelletiers — it’ll take a while to peruse them all.

Starting in the 1700s, fur companies used standard printed contracts. (To see what a sample contract looks like, check out The Northwest Journal. Immediately below the French, they’ve translated it into English. At the very bottom, they offer suggestions as to how to fill out different blanks.)

Highlights from the Centre du Patrimoine site include:

Dates 17910510 means Louis Pelletier signed this contract May 10, 1791, mere days prior to leaving for the rendezvous. (Why so late? Was he recruited to fill a slot at the last minute? Did he need cash for a family or farm?) Others signed in December, January and February.

Their position in the canoe:

On Dec. 6, 1802, Antoine Peloquin dit Filix signed on as devant. Pierre and Antoine Cournoyer were engaged as milieux in his canoe the same day.

An X mark, because most were illiterate. But Felix Peloquin (May 1, 1754) signed his name!

Their destinations, and if they overwintered  (hivernant is French for “Northman”)

“Pork-eaters” were men provisioned by the merchant companies. They paddled to the rendezvous at Grand Portage (or Fort William) via Michilimackinac. Rainy Lake was added, “if necessary,” before they returned home that autumn to Lachine and their community. Here are some destinations:

What they were paid, and if they drew an advance

My questions: Did drawing an advance mean they needed to purchase items to leave? Or that they had family who’d need cash while they were gone? Or something else?

Occasionally they were paid in piasters (Spanish currency) or chelins (shillings). [love that spelling]

The remainder of their wages were paid within a month of their return.

Near the end, this line — “s’oblige de contribuer d’ un par cent sur ses gages pour le fond des voyageurs” — meant they contributed 1% of their wages for the Voyageur Fund (for the families or men who’d drowned, been injured or gotten too old to work?) 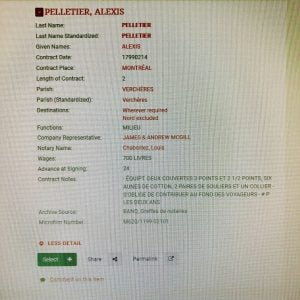 Some men were supplied “double equipment”— language a winterer. In 1799, Alexis Pelletier, a winterer received:

Besides the above equipment, in 1804, Charles Peloquin dit Felix, who was planned to overwinter for 2 years, received per year:

Prior to 1803, voyageurs promised to work 6 days at the rendezvous and portage an additional 8 packs of winterers’ pelts over the Grand Portage. They had the option of carrying fewer pieces and having 6 shillings per pack deducted from their wages.

So the fur trade wasn’t as centralized as I’d expected. Other groups sent out brigades besides the big companies — it wasn’t a monopoly.

I found the data fascinating. My biggest problem was an incomplete family genealogy — I have only the names of the direct line I’m descended from, not that person’s siblings, who may have entered the fur trade. And the age of the voyageur is not listed on this contract. So for the moment, I still don’t know which of the voyageurs listed are related to me, or how.

Will this help in Book 3?

Yes — it gives me permission to have André paddle with other brigades. Earlier I believed winterers always had 5-year contracts (even though André has only stayed one winter in each book). I’ve worried about those shorter contracts. But others worked under 1- and 2-year contracts, exactly the same way as André did.

Can you picture Pretty Mouse shocking the notary when he wrote his own name to his contract? Or Antoine Felix signing on as avant in December, watching his wages increase year to year? And then chatting up the best paddlers to join his brigade?

Check out the website — type in the last names of your ancestors. The site offers clear directions for using it. See which voyageurs are in your family tree.
Then read my fun novels about a wintering brigade (Shelly: “When will book 3 be done? Soon, please!”)
You can buy “Waters Like the Sky” or “Treacherous Waters” through PayPal. Or the ebook.
Ask a question or subscribe to this blog and read more!
Visit me on Facebook: Like or Friend or Comment.