In discussing “Treacherous Waters” in a group with French-Canadian ancestry, I mentioned what I’d learned about Ste. Anne as a patroness of voyageurs. I felt so smug.

Oops. More than one Ste. Anne? I didn’t have a clue. Time to dig deeper.

Who is Ste. Anne? 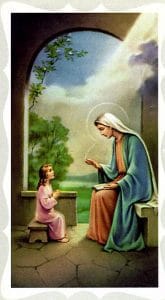 For starters, she’s the grandmother of Jesus, and mother of Mary and her feast day is celebrated July 26.s. What groups seek her patronage?

Who is Ste. Anne de Beaupré?

From further in the online Catholic Encyclopedia, I read that early settlers built a small chapel on the Beaupré hillside in 1658, which was dedicated to Ste. Anne. A healing miracle encouraged the parishioners. Old records say that in 1712 Abbot de Breslay personally experienced Ste. Anne saving him during a snowstorm in which he broke his leg. In gratitude he built a chapel dedicated to her. Later a church was built, and then replaced in 1876 by an impressive stone cathedral. Which is still in use.

By the way, did you ask (as did one of my proofreaders): Why the extra letter “e” on Ste. Anne?

So which one of the Ste. Annes is the patroness of voyageurs?

I can see how the two Annes are connected. Both were revered by settlers as well as voyageurs. But having an incomplete understanding of this tradition, I can’t say. What do you think?