Why Voyageurs Chose the Dash of a Red Sash 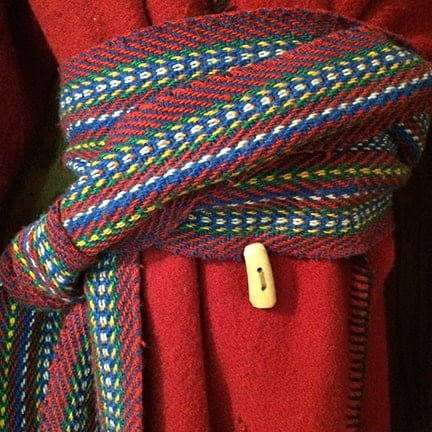 What’s the red sash about? Were they always red? Did voyageurs wear sashes for any other reason than decoration? Could different brigades have matching sashes, like our team uniforms?  Bryce, 16; Deenah, 15; Keira, 11

The colorful wide woven sash is truly a voyageur’s signature piece of clothing. Why?

French-Canadian voyageurs exuded joy and verve. But, working on the lowest rung of workers in the fur trade hierarchy, they had few resources to express that lively style. Their clothes — made of plain homespun linen or wool — were worn hard. When the fabric wore out, canoemen switched into buckskins, trading for them with the Ojibwe. So adding a red sash, functional as well as striking, was an easy way to spice up a tatty wardrobe.

To freshen up after 6 weeks of wearing the same things, it was traditional to stop to clean up a few miles out from the rendezvous (at Hat Point near Grand Portage). The paddlers wanted to look their best, even if their clothes were ragged, stained and patched. Their sashes added sparkle, whether or not the voyageurs could untangle the knots in the long fringes.

At the rendezvous, they’d see the bourgeois in their fancy city clothes as well as the voyageur friends who’d wintered deep into Indian territory — and who probably looked worse than they did. Here they could trade for clothing, if they had coins to spend. 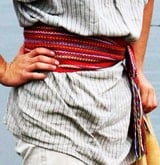 A red sash added dash to a voyageur’s limited wardrobe.

A bright sash did the magic — it added style to their substance.

With the sash being the identifying garb for a canoeman.

It could be a place to tuck a knife, fire steel, or personal items (nobody had pockets), a tumpline to carry heavy items, a tourniquet, sling or splint for an injured limb, a rope. Individual strands could be pulled out if a single thread was needed.

In the winter, a tightly-wrapped sash trapped in the warmth of a capot, the woolen blanket coat. (André, as you may recall from Chapter 1 of “Treacherous Waters,” proudly wore these badges of work.)

And a sash supported a voyageur’s back when he carried heavy packs over portages. It helped prevent injuries — hernias were common among canoemen, from the all the lifting and carrying of 180-pound loads.

How do we know they wore special sashes?

A number of fur traders’ journals and writings of that time mentioned these arrowed sashes. By the way, the French spelling is ceinture fléchée.

All the same? Non!

The color and pattern depended on who made the sash and where. Patterns were handed down from mothers to daughters, both Indigenous and French-Canadian, who wove sashes for husbands, fathers and brothers. Red and other colors were intertwined, depending on what dyes the weavers had access to. 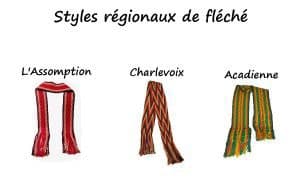 Arrowed sashes were made differently in each communitiy.

Designs were individual, no two alike, and each telling its own story. They included lengthwise stripes, chevrons, arrows and lightning bolts. Different communities such as Fort Assumption, Charlevoix and Acadian used their own unique patterns.

The sash was made long enough so to wrap TWICE around the canoeman’s waist.

Native Americans, already astute weavers of plant and animal fibers, created their own designs, sometimes incorporating beads into the pattern. When the colorful sashes drew the attention of First Nations peoples, they became one of the trade goods — and then a cottage industry for those in New France. Sashes are still signature wear of the Métis.

Ray Meares featured Carol James, a Canadian sash-weaver in a documentary on canoe and voyageur craft (The Company that Built a Country S01E02). In the section at about 24:30, she demonstrated finger-weaving 12-foot-long sashes that were 280 threads wide, and described how — and why — weavers changed the direction of the chevrons.

I’d love to see how it’s done, but the process she describes seems daunting — 280 threads??

Still, it makes me want to incorporate a red sash in my winter wardrobe. How about you?