Where in the world is André? Please give me a map. 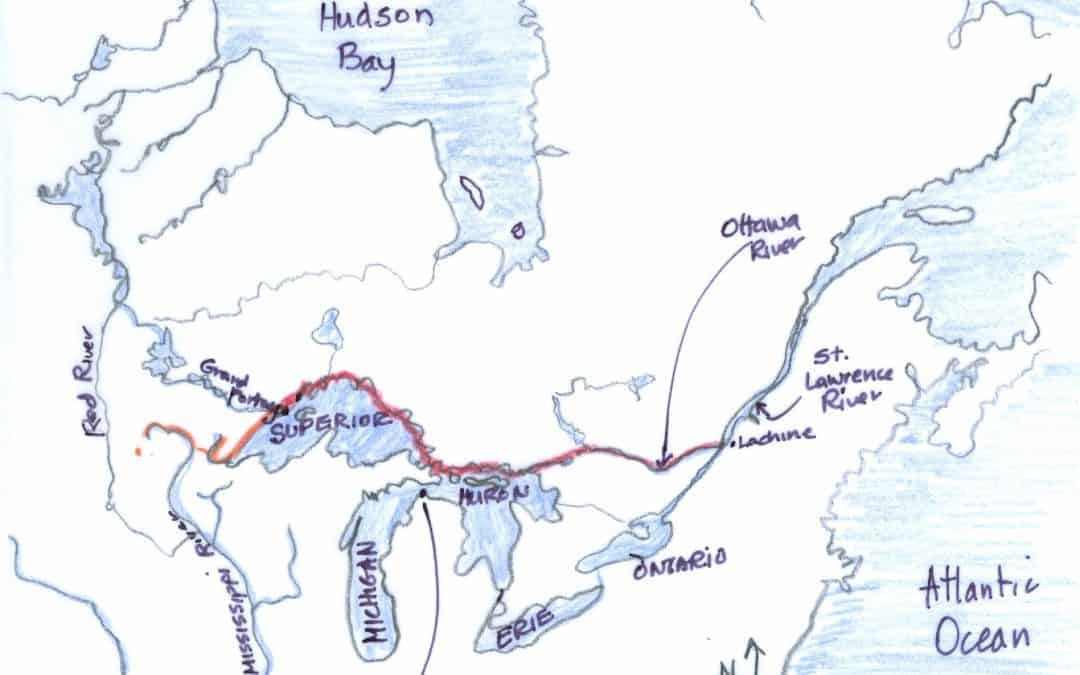 Where in the world is André? Are the waters really treacherous? Please give me a map so I can see where “Treacherous Waters” takes place.
Taya, 15, Blake, and Kjell, 13,

(Time for maps, one of my favorite tasks.)
For a kid in French-Canada in the early 1800s, André is well-traveled.

Both “Treacherous Waters” and “Waters Like the Sky” start in a hamlet — too small even to be a village — along the St. Laurence River near Montréal, Canada. Lachine where the fur brigades took off from (“La Chine” was the stepping-off place for China, so they thought!). Downstream of Lachine was a big rapids, so the voyageurs loaded the brigade canoes upstream, so they didn’t have to start on the dangerous side of the rapids. (Lachine is on the right — or east — side of the map. Now it’s is part of Montréal.)

Just west of Lachine the Ottawa River (often called the Grand River) feeds into the St. Lawrence River. These rivers rush toward the Atlantic Ocean, even more so with heavy snows melting in the spring.

The voyageurs pushed westward on the Ottawa River — paddling on the big waters of Lakes Ontario and Erie is dangerous. It took them a month or so to paddle, décharge and portage (4 miles per hour paddling, 1/2 mile per hour portaging) until they came to the Mattawa River (the Little River) which feeds into the Ottawa. They followed the Mattawa to the French River. This route they learned from the First Nations peoples.

There are 36 portages, remembered for their awfulness, beauty or unique features. On the Ottawa are: 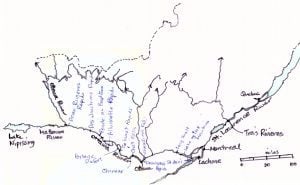 There were 36 portages on the Ottawa and Mattawa Rivers.

On the Mattawa River are: 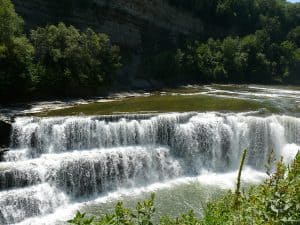 Each falls meant cargo to be portaged, a back-breaking task. 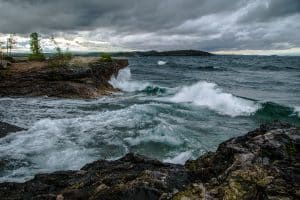 An inland storm on the Great Lakes.

That brings them into the Georgian Bay (north shore of Lake Huron). The voyageurs have now traveled more than 600 miles.
On lakes they can finally reach max speeds (4 miles per hour), and faster with the favorable winds. The brigades stop at Michilimackinac, at the falls (or “sault”) on the Ste. Marie River, before entering Lake Superior.

The voyageurs follow the northern shore of Lake Superior until they reach the New Fort, which is at today’s Thunder Bay, Ontario, Canada. This leg of the journey — about 450 miles — takes 10 days to 2 weeks. (In comparison, the first 600 miles took a month or more.)

In 1807, the rendezvous site was named Fort William to honor one of the North West Company chief superintendent, William MacGillivray.
Grand Portage (in today’s Minnesota) was the site of the rendezvous until 1803. The North West Company took 40 years to move the buildings to the Canadian side of the international boundary. (Oops, I’ll just take your beaver pelts a few more years and then we’ll think about paying you custom taxes.)

After the rendezvous, the pork-eaters will return to Montréal; many winterers cross the almost-9-mile Grand Portage and head into the far north.

However, André and his canoemates continue to the western-most point of Lake Superior to the St. Louis River. This leads them over the hated Savannah portage to the “Father of Waters” (the Mississippi). From there they canoe to Antoine’s fur trade post in western Minnesota.

Here’s what I wonder: Could you navigate through it all? Me, I could manage the river but I’d get lost among all the islands, if there were complicated or multiple feeder streams — like to the Georgian Bay. I’m amazed how these routes were discovered by the First Nations peoples.