What did voyageurs eat? 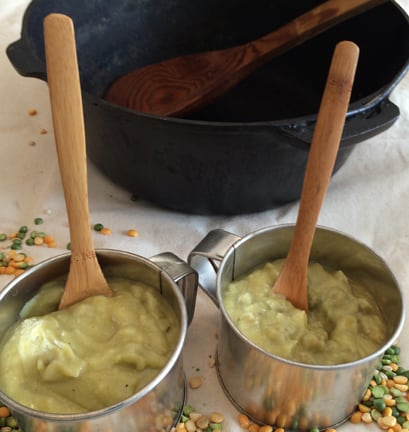 What did voyageurs eat? Only pea soup? Really? (Mara, age 9) Why didn’t they catch fish or shoot game on the way instead? (Jenner, age 14) Or eat something else, like rice or beans? Didn’t they get bored with the same food? (Aubry, age 12)

Well, back in that day, nobody had the wide range of choices — and nobody complained about their food. But the voyageurs’ diet — pea soup twice a day — does not seem very nourishing.

To do the continuous work of paddling for 12-14 hours or the harder work of portaging, voyageurs needed 5,000 calories a day! That’s two and a half times the fuel that adults today need. It’s more than marathoners burn in a race. 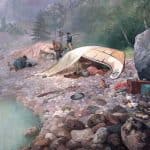 A little history: In the early fur trade days, canoemen found their own food by hunting, fishing or trading when they came upon friendly Indians with extra provisions. However, that took extra time each day and meant the brigade could not travel as far to trade.

Then, fur trade companies realized the wisdom of having brigades carry their own food from Montreal to the rendezvous. Along with the 55 packages of trade goods each canoe carried, they also toted several bushels of peas, and several hundredweight of biscuit and of pork or grease.

Every night a cook from each canoe poured about nine quarts of peas in their kettle, added a strip of bacon or pork and lake water and hung it on a tripod over the fire to simmer until daylight. In the morning four biscuits were crumbled and added to thicken it, enough so that the stirring spoon stood straight up. Now filling the kettle to the brim, the pea porridge provided two full meals that day for the eight to 12 men in the canoe. They paddled for a hour or so before stopping for breakfast; supper came about 8 p.m. 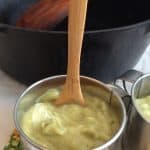 Over time, when the brigades arrived at Sault Ste. Marie, they could purchase other food supplies, like pemmican made by aboriginal women of various Great Plains tribes. Pemmican is a mixture of dried and pounded buffalo meat and fat, with berries added to improve the flavor. Moose, caribou or even fish might be substituted for buffalo. The mixture was crammed into buffalo-skin bags and topped off with melted fat to make a 90-pound parcel. It could last for months or even a year without spoiling. Best of all, it was such a concentrated source of nutrition that a man needed only two to four pounds a day (compared to eight pounds of fish or fresh meat a day)!

Pemmican could be eaten raw or made into “rubaboo,” a porridge traditionally made of peas or corn (or both) with grease (bear or pork) and a thickening agent (bread or flour). Maple sugar or berries could also be added to the mixture. After six weeks of only pea soup, the men looked forward to rubaboo.

Finally, (this next part came as a surprise to me) pea soup was probably the most nutritious food, delivering the most usable calories for work, that they could have eaten. 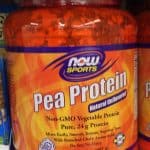 Pea protein is particularly high in arginine, an amino acid that is a precursor to creatine, which delivers energy to muscles. It boosts iron so it builds muscle mass as well as other proteins. It might curb appetites better than other proteins do. And — pea protein is free of common allergens that are found in eggs, dairy or gluten.

So the voyageurs probably couldn’t have come up with a better food. Light to carry when dry, cheap, tastes good with added herbs or vegetables. And here we thought they had a poor diet. Wrong.