Did voyageurs use the same campsites each night they were traveling? 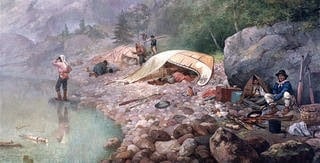 Did voyageurs use the same campsites each night they were traveling? Or did they find new ones all the time? (Cliff)

It was the easiest for voyageurs to stay at a site they knew, and could choose campsites depending on where along the route they were. Because they knew routes, they could estimate how long it would take to the next site, whether it required paddling or portaging.

For example, Daniel Harmon names several sites on the first days of his voyage in 1800 — Point Claire, Chute du Blondeau, the Three Kettles. By that time, there were a few established sites — trading posts, businesses, even homes — along the route between Montreal and Grand Portage. Certainly people who lived in those lonely places would be glad for the company, news or voyageur goods in trade if the canoemen needed food or information.

But not all days worked according to Plan A. Windy or stormy weather, canoe mishaps, even injuries or health were among the reasons they needed to be flexible and find a site near and fast.

When Michel Curot had to wait out bad winds on Lake Superior in 1803, he chose the closest available spot, which was about 3½ leagues from Brulé River where he had hoped to get to. Traveling in northern Wisconsin, Curot described the locations of other overnight sites, like at the end of a portage, where they could décharge instead of carry the packs and canoes. That would be a logical campsite — after an arduous day, the men would be wet and tired and would need to dry out, eat and rest before proceeding.

In his Snake River Journal, John Sayer noted that his brigade camped at the Grand Gallé, or Big Yellow Bank, on Sept. 21 and above the little Gallet Sept. 22 (his spelling wasn’t consistent). Sayer remained at another campsite while his men carried part of the baggage across three long rapids one day. He had his men cache some of their food and trade goods at various locations — sites they knew — before they began searching for the best place to build a wintering post.

In 1833, William Johnston wrote about camping on Otter Tail Point of Leech Lake, Minnesota, which had a trading house and an Indian village of 10 lodges. It was a destination where they could purchase provisions and wait for the main brigade. 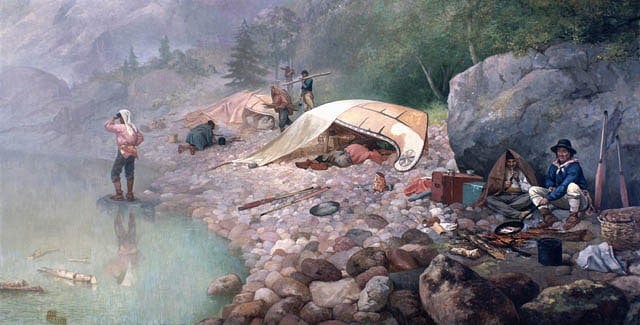 Each brigade preferred to use places they knew, but used common sense in finding a nearer spot when weather or other concerns made that a smarter choice.

A Journal and Travels in the Interior of North America by Daniel William Harmon. New York: A. S. Barnes and Co., 1903.

Letters on the Fur Trade 1833 by William Johnston (Letters of Miengun, an educated grandson of Waubojeeg, the last ruler of the Ojibwa dynasty of Chegoimegon on Lake Superior). Richard Worthington, 2011.